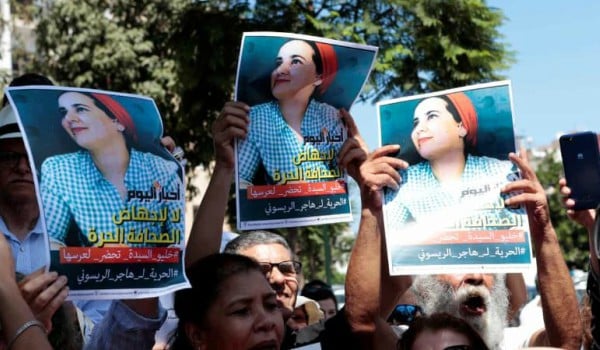 Hajar Raissouni, a journalist working for an independent daily newspaper, was arrested on 31 August along with her fiancé, Amin Rifaat, as they left a doctor’s office in Rabat. The doctor and two others working at the clinic were also arrested on suspicion of carrying out an abortion. After her arrest, Raissouni was detained at a police station in Rabat and on 2 September brought before a prosecutor and charged with sex outside of marriage and “consenting to have an abortion”. In Morocco, couples who engage in sex outside of marriage can be jailed for up to one year, while a woman who has had an abortion can be jailed for between six months and two years.

In the court hearing on 30 September, Raissouni and Rifaat were both sentenced to one year in prison, the doctor involved in the case was sentenced to two years in prison and banned from practising for two years, and two other members of the clinic’s medical staff were convicted – one received a prison sentence of one year and the other eight months.

On 4 September, in a letter sent by Raissouni to her newspaper, she said that while in custody she was interrogated about her political writings, about one of her newspaper colleagues and about her family – including her uncle, Ahmed Raissouni, a prominent theologian and ex-president of one of the country’s largest Islamic movements.

Raissouni said the charges were “fabricated”, in a letter from prison. Raissouni and her fiancé told the court they had already married in a religious ceremony and were preparing documents to register their marriage in law. They also presented evidence that proved she had not been pregnant and that an abortion never took place. It is therefore widely believed she was targeted for her journalistic work with the independent Moroccan outlet Akhbar al Yaoum, where she covered unrest in the north of Morocco.

“We are shocked by this verdict,” Raissouni’s lawyer Abdelmoula El Marouri told Reuters, saying that all the medical and legal evidence should have led to an acquittal, and that the case will be appealed.

Amnesty International Middle East has called for the immediate release of all those imprisoned: “Moroccan authorities must urgently repeal all laws that violate women’s rights, including laws that criminalise sex outside marriage and abortion.”

On 2 October, a sit-in was planned in front of the parliament in Rabat by the Collective Assiouar. Then, a petition was posted on AVAAZ addressed to the Moroccan government, pointing out the threat both to women’s individual freedom and to freedom of speech, and calling on public authorities to stop their pursuit of Hajar Raissouni and guarantee the fundamental rights of women and of freedom of speech in Morocco, as follows: