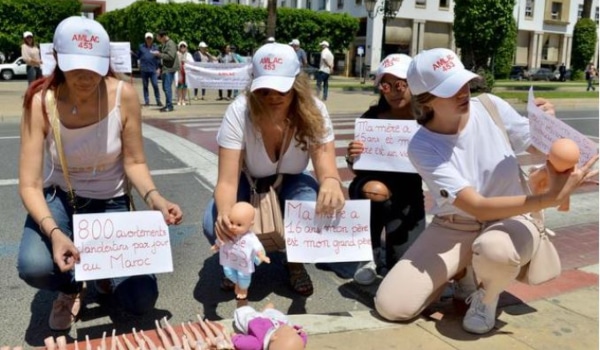 The group demonstrated in front of the Moroccan Parliament in Rabat on 25 June 2019 to demand reform of the law on abortion, because it leads to unsafe, clandestine abortions and child abandonment.

On the pavement, they displayed dolls bearing the inscription “Article 453”, which refers to the section of the law that punishes abortion from six months to five years of imprisonment except when the health of the mother is in danger. Their banners and posters said: “800 clandestine abortions a day”, “200,000 illegal abortions a year”, “26 babies abandoned per day” and were displayed in front of a large contingent of journalists.

The action was initiated by the Moroccan Association for Combating Clandestine Abortions (l’Association marocaine de lutte contre les avortements clandestins, AMLAC), led by Professor Chafik Chraïbi, a leading figure in the fight against unsafe abortion. “We have been advocating for even a partial legalisation of abortion for a decade,” he said, calling for speeding up of the passage of a bill that has not progressed since 2016. “Article 453 is discriminatory and does not take into account the fact of unwanted pregnancies. It is time to abolish it so that women no longer need to resort to illegal abortion,” said Laila Majdouli, a long-time advocate for women’s rights.

An estimated 600–800 clandestine abortions are carried out every day in Morocco, in sometimes very unsafe conditions. Some women use abortifacient drugs or plants that are dangerous. Maternal mortality remains high in Morocco (about 228 per 100,000 births), with 13% of deaths attributed to unsafe abortion, according to WHO data cited by AMLAC.

Among women unable to find the means to have an abortion, unwanted pregnancies lead to the abandonment of children – up to 150 per day, according to estimates. Single mothers live in stigma and children born out of wedlock, illegitimate by law, bear the stigma of their origin all their lives. In 2015, Morocco embarked on an in-depth debate on the urgency of reforming its legislation. The King, Mohammed VI, instructed an official commission to submit law reform proposals. The commission recommended that abortions be allowed in “a few cases of force majeure”, particularly in cases of rape or serious malformations. However, nothing has since been done to pass even these limited recommendations.