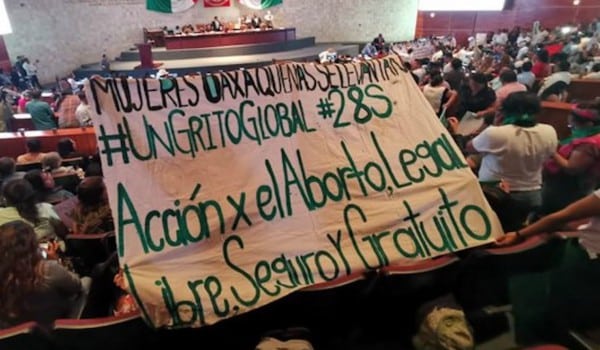 On 25 September 2019 Oaxaca became the second state government in Mexico to decriminalise abortion up to 12 weeks of pregnancy. The Federal District of Mexico was the first, in 2007. Previously, abortion was legal in Oaxaca only in cases of rape, fetal malformation, risk of death for the woman or if artificial insemination was not by consent.

The vote was 24 in favour and 10 against. The outcome of the vote was apparently uncertain until the last minute, because even though the legislature has a majority of leftist Morena party members, not all of them supported the bill. But working closely with allies in Oaxaca over the past year, the bill’s supporters never gave up.

The bill was proposed by Local Deputy, Laura Estrada, with the support of Local Deputy Hilda Pérez Luis, and by a Senator in Guanajuato, Martha Lucía Mícher, all of them members of the Movimiento de Regeneración Nacional (Movement for National Regeneration, Morena).

According to official data, more than 9,000 women in the impoverished state undergo clandestine abortions every year. About 20 women have been imprisoned in Oaxaca for illegal abortions since 2016, according to the newspaper El País. The new law says women are legally guaranteed the right to life, health and a dignified life. Those in favour of the bill, including Deputies Elisa Zepeda and Magaly López Domínguez, both in Morena, said it was the only way to avoid deaths caused by clandestine practices.

The passage of the bill came only days after Mexico’s President Andres Manuel Lopez Obrador sent a bill to the country’s parliament that proposed amnesties for some offences, including abortion.