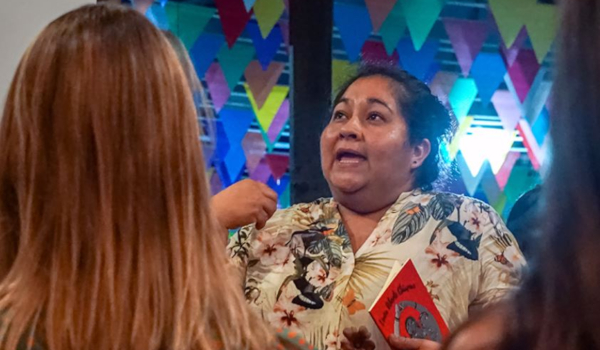 Michelle, a volunteer at Línea Aborto Chiapas, a free abortion hotline, speaks at a forum addressing the myths and realities of abortion. The hotline is part of a network of women in Mexico that provides counseling, support and consultations over the phone to women who want abortions, which are illegal in most of the country. PHOTO: Global Press Journal

…Already a mother and just a few weeks pregnant again, CN, age 26, in San Cristóbal de las Casas, was certain she wanted an abortion. She said she was in a relationship with a violent man and didn’t want to bring another child into that situation. So she sought out KE, an independent abortion companion who dedicates much of her spare time to helping women who want to end their pregnancies. KE told CN how she could use misoprostol to cause an abortion. CN ended her pregnancy at home using the pills, while KE offered her support over the phone. CN said she had no regrets.

KE works independently but she is part of a network of women who help others in spite of the abortion laws. The network includes Línea Aborto Chiapas, a free abortion information hotline founded in 2017. Línea Aborto Chiapas functions in line with the constitutional right to information in Mexico. Article 6 of the Mexican Constitution establishes that every person has the right to freely access information through any medium.

Such efforts are widespread throughout the country. A meeting of Acompañantes en Aborto Autónomo (Companions in Autonomous Abortions) was held in San Cristóbal de las Casas in early April. About 50 women from around the country attended and shared information about their experiences…

This report is part of a series: Global Press Journal reporters around the world examined their communities’ approaches to reproductive health, including values and priorities and how international policies impact them. The other stories in this month-long series can be found here.