In early September, we met with allied organisations to celebrate the anniversary of the Mexican Supreme Court’s ruling that said criminalisation of abortion was unconstitutional and the fact that abortion has been decriminalised in ten states (this was before the decriminalisation in Quintana Roo, which was in October!). We met with many of our colleagues from different Mexican states, such as Di Ramona (Hidalgo), REDefine and Observatorio Ciudadano Nacional de Feminicidio (Veracruz), Las Borders and Siemprevivas (Baja California), Decide (Colima), No se metan con nuestras hijas (Sinaloa), Red por los Derechos de las Mujeres (Guerrero), Centro de Mujeres (Baja California Sur), Red Aborto Seguro and Colectiva Lagunas (Coahuila), and Ipas and the Instituto de Liderazgo Simone de Beauvoir (Mexico City). In an emotional session, we discussed the new challenges faced by civil society to ensure adequate implementation of abortion services in states that have decriminalised abortion in the past three years. We felt that the meeting was decisive in renewing our dialogues and efforts, mainly because we met face-to-face again after the worst part of the pandemic!

This meeting also made it possible to build a common agenda with others in order to ensure the implementation of public health policies on reproductive health that are comprehensive and in line with national and international guidelines. One of these alliances is “Girls, Not Mothers”, which we founded in 2016 along with Amnesty International, Consorcio Latinoamericano Contra el Aborto Inseguro (CLACAI) and Planned Parenthood Global. It aims to urge Latin American countries to fulfil their obligations and ensure the protection of girls. 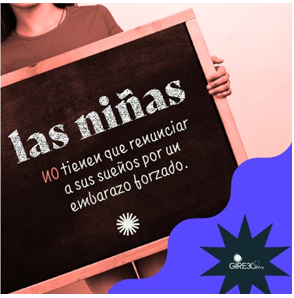 Girls should not have to give up
their dreams for a forced pregnancy.

This movement started as a communications campaign but triggered a process of international litigation that seeks to make sexual violence against girls visible and establish standards for governments to implement actions to prevent it. We have brought four cases before the UN Human Rights Committee to demand the condemnation of Guatemala, Ecuador, Nicaragua and Peru for the lack of justice and human rights violations against four minors.

We are also celebrating 30 years of GIRE’s founding. We are proud to share the book of our 30 years, in which we go back in time and meet again with people who have been part of the organisation.