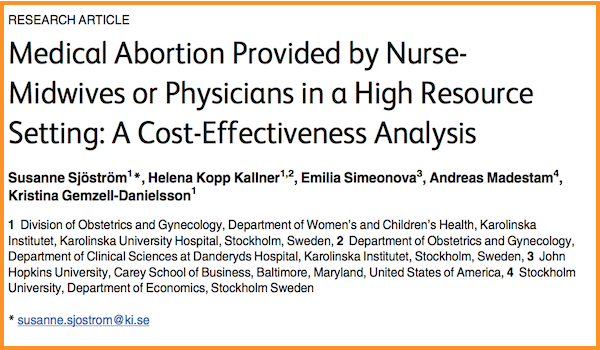 The objective of the present study is to calculate the cost-effectiveness of early medical abortion performed by nurse-midwives in comparison to physicians in a high resource setting where ultrasound dating is part of the protocol. Non-physician health care professionals have previously been shown to provide medical abortion as effectively and safely as physicians, but the cost-effectiveness of such task shifting remains to be established.

A cost effectiveness analysis was conducted based on data from a previously published randomized-controlled equivalence study including 1180 healthy women randomized to the standard procedure, early medical abortion provided by physicians, or the intervention, provision by nurse-midwifes. A 1.6% risk difference for efficacy defined as complete abortion without surgical interventions in favor of midwife provision was established which means that for every 100 procedures, the intervention treatment resulted in 1.6 fewer incomplete abortions needing surgical intervention than the standard treatment. The average direct and indirect costs and the incremental cost-effectiveness ratio (ICER) were calculated. The study was conducted at a university hospital in Stockholm, Sweden.

Early medical abortion provided by nurse-midwives is more cost-effective than provision by physicians. This evidence provides clinicians and decision makers with an important tool that may influence policy and clinical practice and eventually increase numbers of abortion providers and reduce one barrier to women’s access to safe abortion.