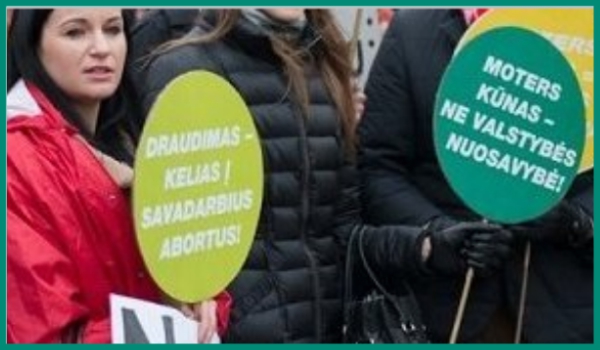 The Lithuanian Parliament is due to discuss a draft law that would strongly restrict women’s access to legal abortion leaving only two options for accessing the procedure: when women’s life and health are in danger and in cases of rape. The text was proposed by the Electoral Action of Poles in Lithuania who have since 2005 unsuccessfully tried to submit bills to criminalise abortion.

In response, the ASTRA Central and Eastern European Women’s Network for Sexual and Reproductive Health and Rights sent letters to the Lithuanian President, Prime Minister and Speaker of the Seimas, calling for rejection of this bill.

In addition, 53 Members of the Parliamentary Assembly of the Council of Europe signed Written Declaration No. 645 on Draft law to restrict access to abortion in Lithuania.

The European Parliament’s pro-choice coalition, #ALLofUS, also sent Lithuanian lawmakers a letter, signed by over 90 MEPs, expressing their protest against this debate in Lithuania.