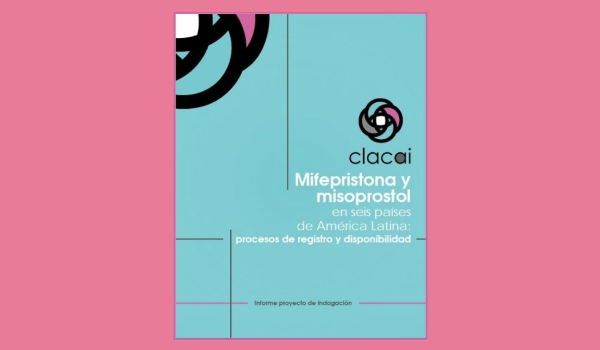 (Mifepristone and misoprostol in six countries in Latin America: details of registration, approved uses and availability)

This 66-page report provides information on:

(a) the details of registration and approved uses of misoprostol and mifepristone in Argentina, Bolivia, Brazil, Colombia, Peru, and Uruguay

(b) the extent of compliance with the registration requirements and approved uses as set out by the countries’ national drug regulatory agencies, and the extent of availability of the medications.

The report makes available up-to-date information for those who supervise and monitor access to safe and legal abortion, as well as the institutions that are involved in registration of medications. One of the aims was that the information provided by this report will help to optimise these processes and prevent potential obstacles. Thus, the report identifies the pros and cons of different alternatives for registration of the two medications. With misoprostol, for example, the fact that it can be registered for other indications as well as abortion in obstetrics and gynaecology. This type of information can help to inform policy decisions for future efforts to register these medications in other countries in the region. The overall objective was to assess the current status of the registration of misoprostol and mifepristone for medical abortion in the six countries. The six countries chosen were those where there has been an attempt, either by civil society initiatives or by health authorities to develop regulations for provision of medical abortion pills within the context of laws that allow at least some grounds for legal abortion.

All six countries have a national agency for the registration of medicines, under the aegis of their ministries of health. In all six countries, misoprostol is registered. The variations found between countries was to do with the indications for which its use is authorised, the routes of administration recommended and the regimens and dosages. Uruguay is the only one of the six countries which has registered a combi-pack containing both mifepristone and misoprostol. In Argentina, Bolivia, Brazil, Colombia and Uruguay the indications for use of misoprostol are similar, but sometimes with different doses, e.g. for induction of labour with a live fetus, induction with a dead fetus, or for retained products. The only country that does not provide for these indications is Peru, who limit use of misoprostol to non-obstetric indications.

Approved indications common to Bolivia, Colombia and Uruguay are the use of misoprostol for prevention and treatment of post-partum haemorrhage, and treatment of incomplete abortion. Colombia has more indications for use in addition to these, i.e. opening the cervix for procedures such as hysteroscopy or placement of an intrauterine device. Bolivia, Brazil and Uruguay have authorised

misoprostol use for legal abortions, even though Bolivia and Brazil have far more restricted grounds for legal abortion than Uruguay. In Colombia, from the year 2010, Profamilia and PROSER began to take the necessary steps for mifepristone to be approved, which finally took place on 3 March 2017.

The second part of the report looks at how misoprostol and mifepristone in their different variants are packaged and what information is provided to users. The report looks at which indications are listed in the package inserts of the different products on the market, divided according to whether the indications include or exclude induced abortion. It also gives details of the comparative costs (in US dollars) of the different pill packets at the time of the study – December 2016.

The purposes for which the pills are approved are described in package inserts in five of the countries: Argentina, Bolivia, Brazil, Peru and Uruguay. In the brands circulating in Colombia, however, this information is not provided. The dosage that should be used for induced abortion according to weeks of gestation of pregnancy is offered in the package inserts of Argentina, Bolivia, Brazil, and Uruguay, but not in those of Colombia or Peru. While Peru does not have any obstetric indications for use of misoprostol, the package inserts warn that it should not be used by pregnant women or during lactation, and that its use should be discontinued immediately if pregnancy is suspected.

In the third part of the report, the requirements that each country has laid down for the registration of misoprostol and mifepristone are outlined. The fourth part of the report describes the elaboration and adoption of guidelines on the provision of one or both of the medications in relation to incomplete abortion and legal induced abortions. And the fifth part looks at attempts to register the two medications and whether these succeeded or failed.

In the last section of the report, the conditions that led to successful registration are summarised, the most important ones being the existence of normative frameworks which regulate the right to legal abortion on specific grounds. Most important, however, was what happened when law reform expanded the grounds for abortion to include the right of women to decide to terminate a pregnancy within a system of time limits – as in the case of Uruguay. In these instances, the difficulties seem to have been ironed out tremendously.