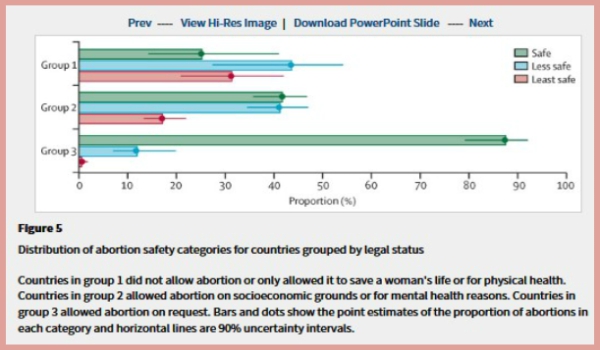 Bela Ganatra and colleagues present an innovative and important analysis of global abortion safety, in which they attempt to move beyond the binary understanding (safe or unsafe) of abortion safety. As the availability of misoprostol increases, and abortion telemedicine services reach more women worldwide, fewer women are undergoing abortions with invasive or outdated methods and more women are having abortions outside of formal health-care systems. These changes prompt a need for rethinking how we view and measure abortion safety. Therefore, the study by Ganatra and colleagues is very timely.

The approach used in the study, although it had limitations, offers a more nuanced gradation of safety: abortions were classified as safe or unsafe, and unsafe abortions were further divided into less-safe and least-safe categories. This three-tiered classification focused on two technical aspects of the abortion process (abortion provider and method) and is said by the authors to be aligned with the conceptual definition of unsafe abortion used by WHO. However, the safety classification did not consider abortion outcomes, as was recommended by Sedgh and colleages.3 Outcomes were instead considered by examining the association between abortion safety and case fatality rates.

Global, regional, and subregional classification of abortions by safety, 2010–14: estimates from a Bayesian hierarchical model

Background Global estimates of unsafe abortions have been produced for 1995, 2003, and 2008. However, reconceptualisation of the framework and methods for estimating abortion safety is needed owing to the increased availability of simple methods for safe abortion (eg. medical abortion), the increasingly widespread use of misoprostol outside formal health systems in contexts where abortion is legally restricted, and the need to account for the multiple factors that affect abortion safety.

Methods We used all available empirical data on abortion methods, providers, and settings, and factors affecting safety as covariates within a Bayesian hierarchical model to estimate the global, regional, and sub-regional distributions of abortion by safety categories. We used a three-tiered categorisation based on the WHO definition of unsafe abortion and WHO guidelines on safe abortion to categorise abortions as safe or unsafe and to further divide unsafe abortions into two categories of less safe and least safe.

Interpretation Increased efforts are needed, especially in developing countries, to ensure access to safe abortion. The paucity of empirical data is a limitation of these findings. Improved in-country data for health services and innovative research to address these gaps are needed to improve future estimates.