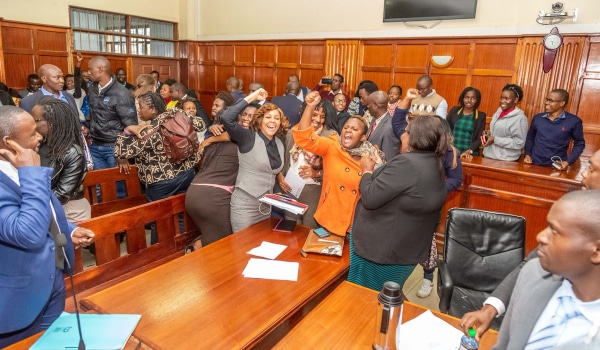 On 12 June 2019,the Center for Reproductive Rights won a landmark case challenging the Kenyan government’s withdrawal ofthe “Standards and Guidelines for Reducing Morbidity and Mortality from Unsafe Abortion in Kenya” (Standards & Guidelines). The Center filed the case on behalf of an adolescent (JMM)—who died last year after suffering from complications that resulted from an unsafe abortion—as well as the Federation of Women Lawyers (FIDA) Kenya and two community human rights advocates. The case was presided over by a five-judge bench at the Nairobi High Court.

In this ground-breaking decision, the Court found that the Director of Medical Services and the Ministry of Health had violated the rights of Kenyan women and girls by arbitrarily withdrawing the guidelines, thereby creating uncertainty as to the status of legal abortion and discouraging medical providers from performing abortions for fear of criminal prosecution. It provided a comprehensive ruling which:

In 2015, the petitioners filed a case against the Attorney General, Director of Medical Services, and the Ministry of Health. After four years, theimplementation of the High Court’s order will allow health care providers to offer abortion and post-abortion care services without the fear of being prosecuted.

In September 2012, the Ministry of Medical Services published “Standards and Guidelines for Reducing Morbidity and Mortality from Unsafe Abortion in Kenya.” In December 2013, the Director of Medical Services withdrew the Standards & Guidelines under unclear circumstances and without the involvement of the stakeholders who had participated in its development. This was followed by a memo in February 2014 that further stated that there was no need for the training of health workers on safe abortion care or the use of the drug Medabon for medical abortion. The Ministry also said that all such trainings should cease, and that failure to comply would lead to legal and professional recourse.

This case was filed in response to these actions by the Ministry.The petitioners urged the High Court to protect women’s health and lives by restoring safe abortion trainings and calling on the Ministry of Health to reinstate the Standards & Guidelines to provide clarity on when and how to provide legal abortion care.

Congratulations to the Center, the petitioners, and all those who helped and supported this important case!!