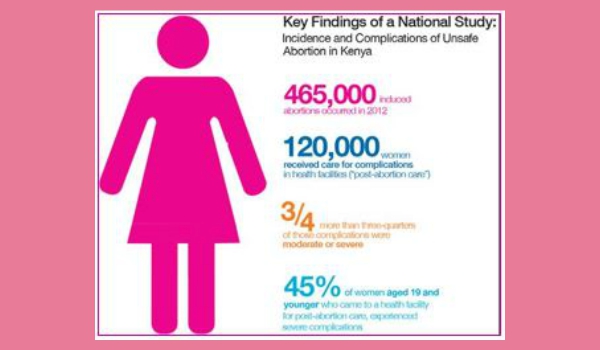 Policymakers in Kenya are being confronted by the harsh reality of the staggering cost of treating unsafe abortions. According to a research by the Ministry of Health, which was published in February 2018, the treatment of unsafe abortion complications cost the public health system a total of Ksh 432.7 million (approximately US$ 5.1 million) in health personnel salaries and medical supplies in 2012.

Rift Valley and Western regions saw the greatest amounts of money spent as a consequence of unsafe abortion, standing at Ksh 112 million and Ksh 83 million respectively. The two regions also had the greatest number of women admitted to public facilities for complications from unsafe abortions in 2012.

The study also shows that in 2012, the country recorded 464,690 induced abortions. According to the Ministry, it required 7.4 hours of health care personnel time to treat a woman for complications arising from an unsafe abortion.

The research further detailed projections in 2016 at Ksh 533 million as the price the country paid due to unsafe abortions.