Home » News » Joining together in solidarity following the election of Trump, USA

On 9 November, Rewire reported: “Following the election of Republican Donald Trump to the White House, women of color in New York City are joining together over the next four days in solidarity against misogyny, racism, Islamophobia, and anti-immigrant sentiments.

“This action builds on October’s #GOPHandsOffMe protests, when women of color and survivors took to the streets and made videos in response to the tape in which the president-elect could be heard through a hot mic speaking about sexually assaulting women.

Thousands will mobilize nationwide to tell the country that the leadership of women of color will not end at the ballot box. These first 100 hours are the kickoff to demand accountability from all holders of public office and to spread an anti-hate agenda that includes a vision for Black lives, common sense immigration reform, and an end to rape culture, according to their press release…

“This election was a referendum on the politics of hate and division. We have a long way to go,” said Ai-jen Poo, executive director of the National Domestic Workers Alliance, in the release.

“In conjunction with the launch of #Our100, the leaders will release polling data from Celinda Lake about women of color voters and an open letter to the nation to be published in major national publications this week.

“Our work did not start, and it will not end at the ballot box,” said Olguín-Tayler, a survivor of sexual assault, in a statement. “We are women who lead organizations, work in Hollywood, teach in our universities, women who are ordained faith leaders, who run large businesses; women who are mothers, who take care of our land and our elders. We came together across our differences to write this letter to our fellow Americans because we know we can, and must, do better. We need a nation that does right by women. Because when women of color are doing well, when Black and Muslim and Indigenous women in particular are doing well – this whole country will be well.”

“We stand determined to hold the vision of a just, inclusive America worthy of ALL of her people,” McGhee said in the release. “No longer can anybody sit on the sidelines. This election will be the last stand of the past, and tomorrow is already being born.”

Also on 9 November, The Intercept reported that Mike Pence, Trump’s vice-president, had introduced the first amendment ever to defund Planned Parenthood in Congress in 2007. He also co-sponsored a bill that sought to redefine rape that distinguished between “forcible” rape and other kinds [sic]. This year, Pence signed an anti-abortion bill in Indiana that mandated funerals for all fetuses, which was struck down by a judge who ruled that it was unconstitutional. 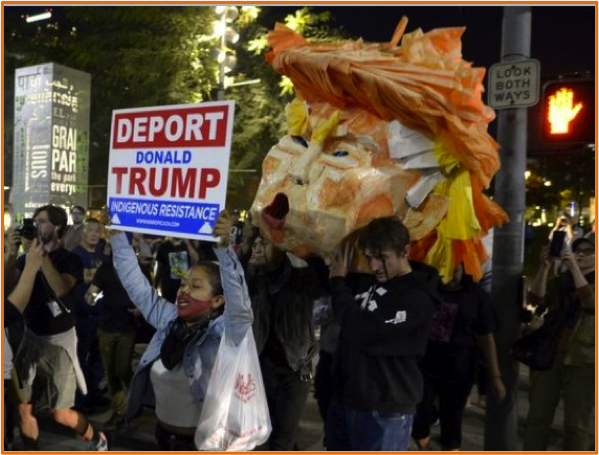 Perhaps most importantly, when considering the extent to which the election of Donald Trump is a political disaster, is the fact that the Ku Klux Klan, founded in 1866 after the South lost the American Civil War and described as the oldest hate group in the USA, announced that they would hold a Trump victory parade in North Carolina, as reported by the Los Angeles Times, on 10 November.

What gives hope are the demonstrations, led by many thousands of young people, that took place in New York City, Boston, Philadelphia, Chicago, Los Angeles, San Francisco, Oakland, Portland, Seattle, Phoenix, Las Vegas, Atlanta, Fort Worth, Miami, West Palm Beach, St Louis, Denver, and Washington DC, on many university campuses and outside high schools across the country, illustrated in a collection of videos and over 100 photographs taken all over the country, collected by USA Today, 9 November, with slogans such as “Hate never made us great”, “Build bridges, not walls” and “Love trumps hate”. 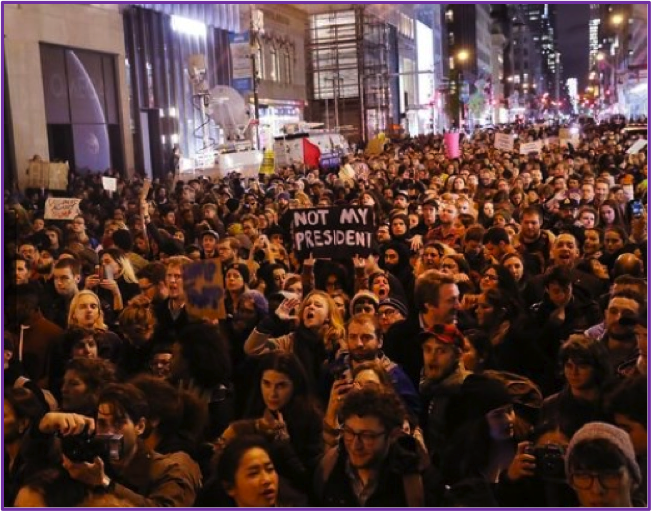