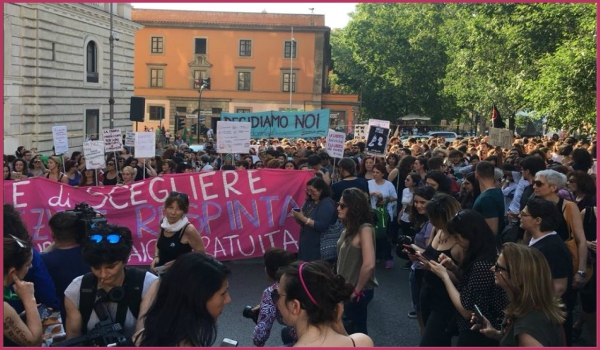 This article opens: “Ireland will hold a referendum on 25 May… But tough law is not always needed to actually restrict access to abortion: in some countries where abortion is legal, women face increasing problems to access it because non-objecting gynaecologists are simply not available.”

Italy is one of the few countries that keeps a record of doctors who refuse to do abortions, which have been legally guaranteed since 1978. Over the past 20 years, however, there has been a 12.9% increase in the number of doctors who refuse to perform abortions on moral grounds, according to the Italian Ministry of Health (total: 70.9% in 2016). But in some regions the figure is close to 90%.

While the number of recorded abortions has dropped by 17% since 2010, “spontaneous abortions” have been increasing, as well as clandestine abortions, which according to Rome-based gynaecologist Silvana Agatone, is new and occurring only in the last five years, especially among women she calls “foreigners”.

On 26 May, thousands of Italian women marched all around the country, under the banner, ‘My Body, My Choice’ to mark 40 years of the historic 1978 law. Michela Pusterla, an Italian feminist in the Non una di meno movement, wrote Friday in Jacobin: “In Italy and elsewhere, as fascist and sexist anti-choice movements grow their presence in Parliament and public hospitals, the fight for reproductive rights becomes larger than itself. It becomes a global fight for liberation; for another society based on autonomy and self-determination.”