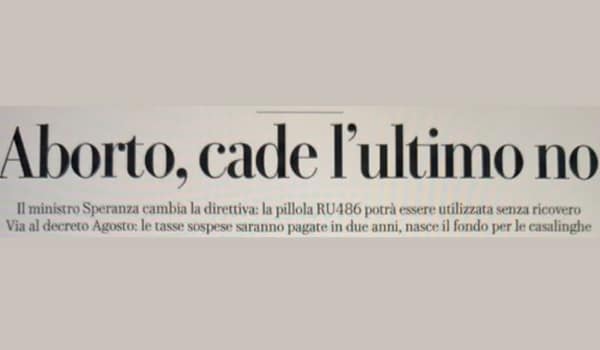 After ten long years of battles, in Italy a woman seeking an early medical abortion is no longer required to be admitted as an inpatient to hospital for three days to take the medications. The upper time limit to use medical abortion pills was extended from 7 weeks gestation to 9 weeks as well. The woman must, however, still attend an in-person appointment at a day hospital to obtain the pills. Twice?? Unclear. Where the abortion itself is intended to take place is not yet clear either, as the new guidelines have not yet been published.

The published information comes only from an announcement on social media by Italy’s health minister, Roberto Speranza, on 8 August 2020. The actual wording of his Twitter post (… prevedono l’interruzione volontaria di gravidanza con metodo farmacologico in day hospital e fino alla nona settimana – … provide for the voluntary termination of pregnancy with a pharmacological method in a day hospital and up to the ninth week) implies the abortion would still take place in the hospital. Home use is thought to require a change in the law, not just in the guidelines.

Speranza said the changes were based on “scientific evidence” and were “an important step forward” in line with Italy’s 1978 law on abortion, which he described as “a law of civilisation”.

Anna Pompili, an obstetrician-gynaecologist who has been campaigning for abortion rights for many years, described the changes as “a first step that distances us from the diktats of the Vatican”.

On 29 June 2020, Tuscany had announced they would be the first Italian region to make this new guidance possible but not how soon it would come into effect. They said their Regional Council had already adopted an opinion in 2014 that hospitalisation was not necessary. However, they weren’t the first this time. In the Lazio Region, a similar step was announced on 25 March 2014 but also not yet implemented.

Meanwhile, a detailed Human Rights Watch article describes the additional difficulties finding a hospital to provide an abortion in many parts of the country during the first months of the Covid-19 pandemic.