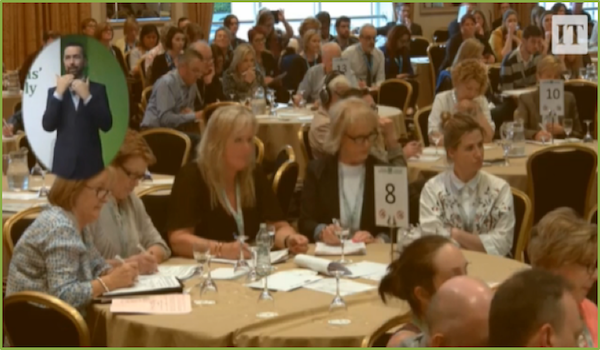 The remit of the Citizens’ Assembly in Ireland, which began meeting in October 2016, was to consider the views of the country on the future of the 8th amendment to the Irish Constitution, which gives an equal right to life to an embryo/fetus as to the woman carrying it. Since then, they have reviewed 13,500 submissions from an enormous number of groups and individuals with views on all sides of the question. There has also been a major campaign by the national abortion rights coalition, Repeal the 8th, and all its member groups and other supporters which has been very visible, garnering enormous support.

On 22-23 April, the Assembly met for the last time, at least on this subject. On 22 April, three votes were taken. In the first vote, members had to choose between retaining the 8th Amendment in full or not retaining it in full. The vote was 79 to 12 for not retaining it in full. In the second vote, members had to choose between repealing the 8th Amendment (deleting it and not replacing it) or to replace and amend it. The vote was 50 to 39 to replace and amend it, with 2 abstentions.

In a third ballot, the group voted 51-38 to an amended ballot paper that proposed the 8th Amendment “should be replaced with a constitutional provision that explicitly authorises the [parliament] to legislate to address termination of pregnancy, any rights of the unborn, and any rights of the pregnant woman”. The parliament will need to act on this recommendation, and a parliamentary committee is already being set up to consider how to do so. If the committee and the parliament can agree a revised clause for the Constitution, it would need to be approved by the parliament and then subjected to a referendum. If passed in a referendum, the parliament would then need to consider a reformed statute or other form of abortion law to reform or replace the current 2013 law, which effectively outlaws almost all abortions. All this is likely to take well into next year, if not longer.

During what was described as a heated debate, some Assembly members said they had voted for reform of the 8th Amendment rather than repeal because the group had been advised that repeal might lead to legal uncertainty over the issue of abortion. They called for a re-vote on the second ballot, but the Chair ruled this out.

On 23 April, the Assembly voted on 13 different grounds on which they might allow abortion. A large majority of the 92 members present voted to allow for abortion on all 13 grounds considered, and a large majority in almost all cases also chose either a 22-week time limit or no upper time limit, and a minority a 12-week limit or voted no. Those voting yes for no time limit or a 22-week limit on each ground were as follows: 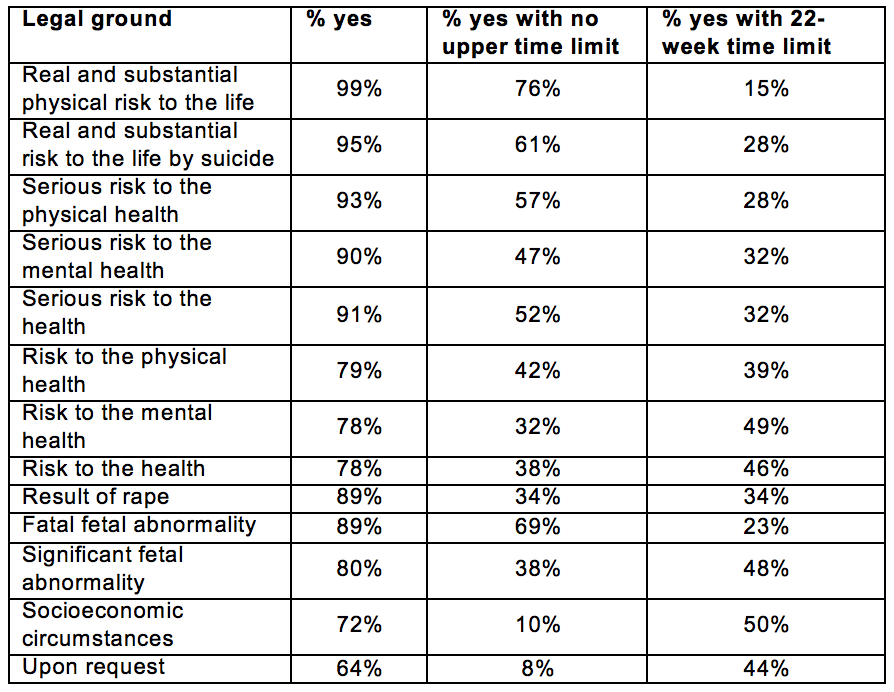 The Assembly’s deliberations and recommendations will form the basis of a report sent to the parliament by the Chair of the Assembly in June.

The reaction has been all over the media and social media ever since. Ulla Mullaly, Irish Times journalist, wrote on 24 April: “…What the Citizens’ Assembly showed at the weekend is that abortion has no place in the Irish Constitution, and nor is the Constitution the effective or appropriate place for women’s healthcare to be controlled.”

Independent polls show a pretty consistent and large majority in favour of liberalising the law but to what extent is another question. The answer is not set in stone, since debate over the coming months (as during the previous year) may make a great deal of difference. While everyone except the anti-abortion movement may agree that the Citizens’ Assembly provided a strong motivation for change, the views of members of the parliament are unlikely to be as progressive.

As other Irish Times articles summed it up on 24 April: “Attention now switches to the politicians. To say most of them are not exactly relishing it would be an understatement.” Many politicians think a referendum is inevitable, but several political sources are saying that current parliamentarians are “highly unlikely to put as liberal a set of proposals as those recommended to the electorate…” On the other hand, as one Minister admitted: “If the Citizens’ Assembly is the way middle Ireland is thinking, we can’t ignore it”.

For background on the formation and deliberations of the Citizens’ Assembly, see Campaign newsletter, 10 January 2017.

SOME TWEETS IN RESPONSE FROM IRELAND 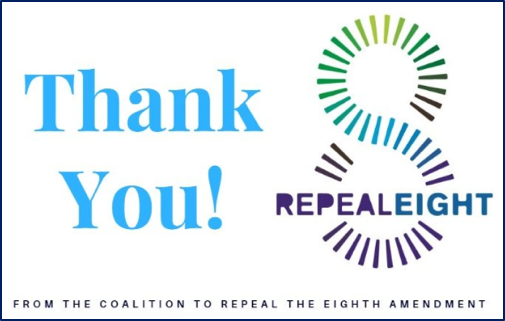 Citizens’ Assembly votes to recommend that terminations of pregnancy should be available in Ireland with ‘no restriction as to reasons’. @rtenews

The #citizensassembly vote demonstrates the value of calm deliberation, rationality and listening to the people. @JaneSuit

If the legal change recommended by the assembly passed, Irish women would no longer have to travel for an abortion. @ellenmcoyne

What a day! What a result from v determined #CitizensAssembly members. Still pinching myself – 72% socio-economic reasons & 64% on request. @ailbhes

The #citizensassembly have left our politicians with absolutely nowhere to hide on this issue. No more excuses. #repealthe8th