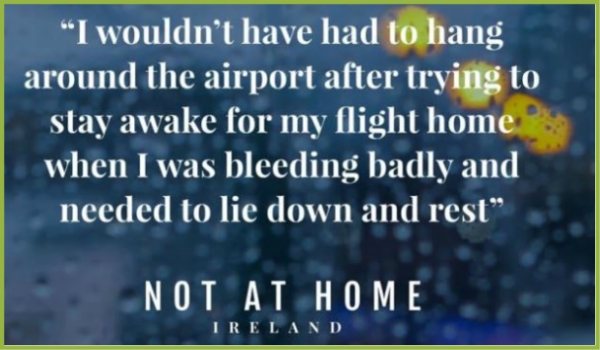 Stories from women who have had to travel to England from Ireland and Northern Ireland for abortions took centre stage at the Not at Home exhibition in London in December.

Abortion is illegal in almost all circumstances in Ireland. It is also illegal in Northern Ireland, where the Abortion Act 1967, which allows women access to the procedure in the rest of the UK, was never extended. An estimated 10 women per day travel from the island of Ireland to access abortion in England.

Artists and abortion rights activists Grace Dyas and Emma Fraser have spent the past two years collecting the stories of women who have made this journey, dating from 1983 to now, and planned to tell every single one of them during a performance of Not at Home in a theatre performance on 16 and 17 December. They hope to raise money to take the show around Ireland ahead of a referendum on legalising abortion next year.

“One of the earliest stories we got was about a woman who had a cup of tea in the airport on her way over to Leeds, and when she got to the clinic they said she couldn’t have the procedure because she’d had the tea, meaning she couldn’t have an anaesthetic,” Dyas said. “They told her she’d have to come back another day, but that was impossible for this woman. Travelling from Ireland, she’d arranged all her work and everything around it. She had to have the procedure with no anaesthetic.”

“These women are invisible most of the time,” she said. “They’re just referred to as statistics, but there are 10 a day travelling to the UK and you don’t hear anything about who they are and what their experiences are. We’re trying to highlight and make visible their reality.”