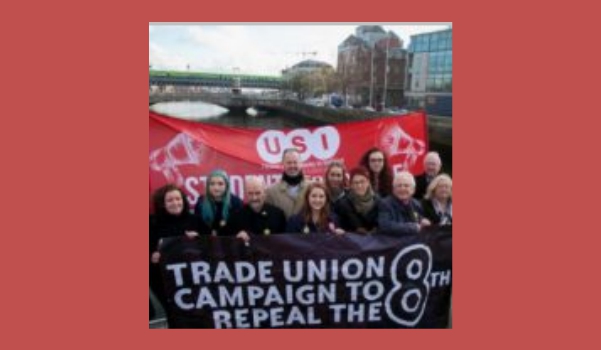 One fifth of workers have had “direct experience of abortion”, according to a survey conducted by researchers at Ulster University. The study, in which more than 3,000 union members in the Republic of Ireland and Northern Ireland participated, highlights workplace issues raised by the prohibition on abortion. These include costs, time off work, stress and in some cases emotional trauma associated with the stigma and isolation, the authors state.

Conducted on behalf of five trade unions – Unite, Mandate and the Communications Workers Union in the Republic, and Unison and the General, Municipal Boilermakers in Northern Ireland – the report finds 23% of respondents had either had an abortion themselves, or their partner or a close colleague had. The five unions are all part of the Irish Congress of Trade Unions’ campaign to Repeal the Eighth Amendment of the Constitution, which prohibits abortion in the Republic.

There were “overwhelmingly” strong responses in favour of legal reform, with 80% saying “women’s health should be the priority in any reform of the abortion law” and 72% saying politicians should “show leadership and deal proactively with widening access to abortion”. Some 87% said the criminalisation of women who have abortions should be removed from the statute books. 46% either agreed or agreed strongly that women and girls should be able to use the medical abortion pill at home, while 18% neither agreed nor disagreed with being able to use the abortion pill at home.

Among the report’s calls were for unions to “develop policies in dealing with . . . abortion as workplace issue” including providing information about support services; to support workers accessing their employment rights, including sick leave, and, to lobby Government and public opinion on abortion law reform. “What emerged clearly from the survey… was that this is a crucial issue for contemporary society…. Unions have a responsibility to help inform wider societal views on abortion, abortion access and legal reform.”

Note: On 24-25-26 October, the UK Supreme Court will hear presentations on an application by the Northern Ireland Human Rights Commission for Judicial Review (Northern Ireland) to consider whether sections 58 and 59 of the Offences against the Person Act 1861 and section 25 of the Criminal Justice Act (NI) 1945 are incompatible with Articles 3, 8 and 14 of the European Convention on Human Rights (ECHR) in failing to provide an exception to the prohibition on the termination of pregnancy in Northern Ireland in cases of serious malformation of the fetus or pregnancy as a result of rape or incest. We will report on the review in an upcoming newsletter.