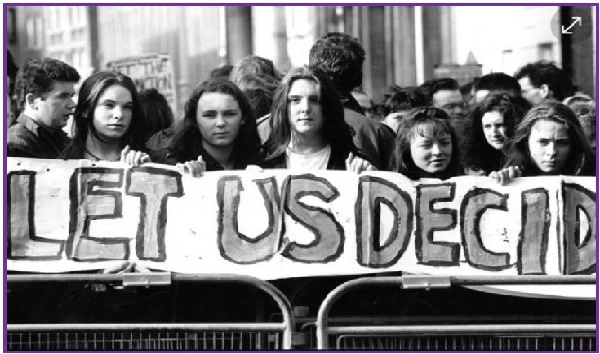 Anyone who wondered what the Irish media would have to talk about on the morning after the 8th amendment became history need not have worried. A rush to amend the current abortion law has started. Under the current law, the so-called Protection of Life during Pregnancy Act 2013, abortion is legal only when a pregnant woman’s life is at risk. This includes the risk of suicide. Exactly 26 women had a legal abortion in Ireland under this law in 2015 and in 2016, 25 women.

Under that law, an illegal abortion, such as self-use of medical abortion pills, can be punished with up to 14 years in prison. In one case in late 2016, a court order was used to detain a pregnant child, who was said to be very distressed to find out she was pregnant, after she asked for an abortion. The order was intended to stop her from being taken abroad for an abortion, and was only rescinded by a second judge. Travelling outside Ireland for abortion is permitted under the law, though in one case reported in August 2014, a young asylum seeker, who had become pregnant due to rape in her home country, was threatening suicide, and was seeking permission to travel to Britain for an abortion. Instead she was locked up in a hospital until she was 25 weeks pregnant and then forced to have a caesarean section. The then Health Minister, Leo Varadkar, and then Justice Minister, Frances Fitzgerald, received briefings on what had happened but neither intervened in the case, according to the Sunday Times.

This all sounds like it happened in another century, and yet here is what is happening today, at breakneck speed, based on reports from 29-30-31 May in the Irish Times:

On 30 May, Labour and Sinn Fein said they wanted bits of the current abortion law repealed while the Government works on the new, substantive legislation. One member even wants the Dail to postpone its summer holidays to work on it.

Here is how journalist Pat Leahy reports in the Irish Times the reply from Leo Varadkar, Prime Minister since June 2017, and Simon Harris. “Cool your jets… This is a complex business. The legislation must be carefully drawn up. The medical bodies have to formulate clinical guidelines to govern medical practice in the abortion areas. The drugs in the abortion pills have to be approved by regulatory authorities. The Health & Safety Executive has to figure out how it will organise and pay for the service. The agreement of doctors to provide the service has to be secured. It will be, Varadkar explained, January next year at the earliest before the service is in place. And that’s probably being optimistic.”

Perhaps the most emotional politician’s statement, recorded on video, was made by Clare Daly in the Dáil on 29 May, in which she reminds the house who the real agents of change were in this case. It was recorded during the first sitting after the referendum results were announced; the only speakers were on the YES side though journalist Miriam Lord is pretty sure that won’t last for long either.

Lastly, for a bit of photographic history of street demonstrations about abortion since 1981, among which the strength of the anti-abortion movement is well illustrated, see this 23 September 2016 visual history.