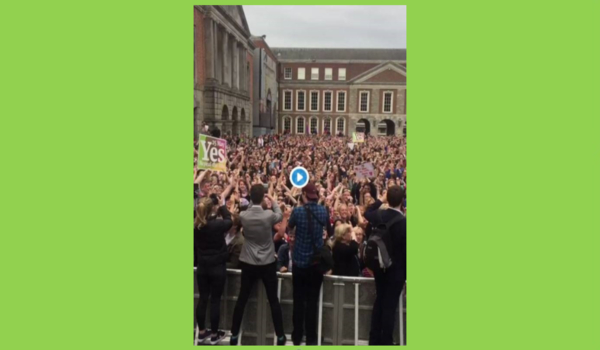 An historic day – the scenes at @Dublincastle for the formal declaration in #Referendum2018 @rtenews @rtepolitics pic.twitter.com/F3Yl4O7QHY

Cheers when the vote was announced at Dublin Castle

Here is the response of the Abortion Support Network (ASN), sent by e-mail on 27 May to their supporters, expressing both celebration and already looking forward to what is yet to happen:

“We’re crying, we’re laughing, we’re possibly slightly hungover but we’re also . . . still answering the phone. While we are thrilled, delighted, bowled over, wowed and amazed at the results of the referendum, the ASN phone is still ringing.

“What? But the 8th was repealed!

“Yes, it was. IT WAS!! And in a mighty, mighty landslide that’s an utter triumph. But as hard as everyone worked to repeal the 8th, that’s all the referendum did – remove the bit of the Irish constitution that makes abortion legislation impossible.

“As of right now, abortion in Ireland is still illegal in almost all circumstances.

“And even when there is legal abortion available in Ireland, there will still be women and pregnant people who need abortion beyond 12 weeks, who fall through the cracks of legal provision or, for whatever reason, [may] need to travel to England for an abortion.”

Then, on 28 May, Catherine McGuinness, who was a member of the Irish Supreme Court between 2000 and 2006 and campaigned against the 8th Amendment in 1983, wrote in the Irish Times:

“I could not resist a moment of triumph, after all the 35 years. The scene in Dublin Castle on Saturday was amazing – faces full of delight, euphoria and at least some astonishment. There was real joy in the meeting of the men and women of 1983. I exchanged memories with Brendan Howlin who had shared with me the fight to defeat the amendment legislation in the Senate. We had so nearly won then. It has been a long 35 years. To the No campaign supporters we have to offer sympathy – we know what it feels like to lose.”

And on 29 May, the Irish Times reported that “A cross-party consensus has emerged to pass legislation to reform Ireland’s abortion laws through the parliament much more quickly than had been anticipated.” Whether this proves to be a pipedream in the coming months, and the question of whether it will be a law that meets women’s needs first and foremost, or the needs of politicians and doctors, remains to be seen.

Nandini Archer, Campaign press officer, reports: The influence of this event has been reflected in interest on the part of journalists in Latin America, North America and Africa, and a few in Asia, as well as the constant press of reports from Ireland, both in the run-up to and during and after the vote. This includes journalists from Clarin, Verso Books, Hindustan Times, Huffington Post Brasil, South China Morning Post, openDemocracy, Bustle, Times News Zambia, Thomson Reuters and Sky News. We received media enquiries from journalists based in Argentina, Zambia, Colombia, Brazil, South Africa, India, USA and UK. It seems that many journalists based in Africa and Asia were initially unaware of the significance of the referendum, but then we were inundated with enquiries from them when the exit polls were announced on Friday evening. Journalists in Latin America and USA were more informed but were most interested in relaying the results as they came out and were keen to draw parallels with abortion in the rest of the world.

There was an immense amount of support for #Repealthe8th on our social media sites, which soon turned into #Repealedthe8th. We had conversations online with advocates and (very excited) young people, and received retweets from a handful of influential groups and individuals, including UK Members of the European Parliament.