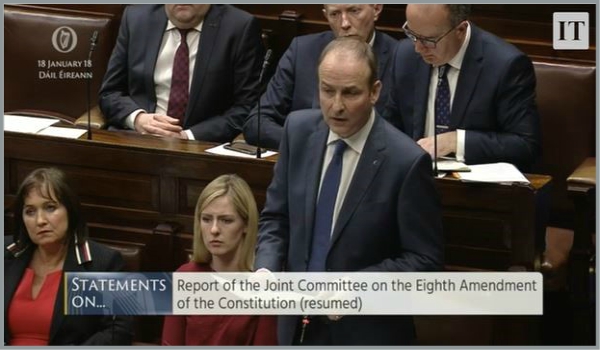 Political party Fianna Fáil leader Micheál Martin says he changed his stance on abortion having evaluated the evidence from the Oireachtas Committee on the Eighth Amendment. He described the issue as deeply personal, not a party political one.

He said: “If we are sincere in our compassion for women and we are sincere in respecting their choices, then we must act.” He said the Eighth Amendment had not stopped abortion in Ireland and that people had to face up to the realisation that the law had caused real damage.

Fianna Fáil’s members in the parliament were described in the Irish Times as “stunned” at this unexpected declaration. Mr Martin said he would vote for the proposal to legalise abortion on request in the early months of pregnancy. This earned him praise both from women members of his party, which he in turn was apparently not expecting, and from abortion rights advocates.

VIDEO OF HIS STATEMENT