Home » News » IRELAND – 1st anniversary of repeal of the 8th Amendment to the Constitution: 25 May 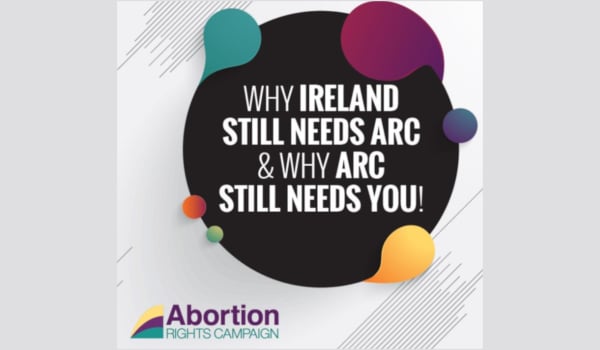 Celebrations are planned in several parts of Ireland, in London and probably elsewhere too. We hope to share photos and reports next week. Meanwhile, two women’s groups talk about how they see the picture one year on:

We achieved the incredible when we repealed the 8th last May, but the fight for free, safe, legal and local abortion across Ireland is far from over. We need volunteers to help fight for better abortion access in the South, abortion rights in the North, and a system that works for everyone.

People in Ireland can now access free, safe, legal and local abortion for the first time in the history of the State. However, there are still gaps in care for many and ARC volunteers are fighting to make sure that everyone can access the care they need. For example, the new law includes a mandatory three-day waiting period, which has no grounding in medicine or best practice. It creates additional obstacles and unnecessary stress for people in abusive relationships, people in rural areas, people with disabilities and people close to the 12-week cut off point, among many others.

There are many other issues with the legislation. Doctors are interpreting the legislation conservatively due to the ongoing criminalisation of providers. People, including those faced with diagnoses of severe foetal anomalies, are still travelling for abortion care. Doctors and patients are facing intimidating protests outside clinics. The current legislation is leaving too many people behind, including those who are most vulnerable and our neighbours in the North.

ARC will continue to fight for legislation that serves everyone and stand with our siblings in Northern Ireland in their fight for free, safe, legal and local abortion. We will continue to stand in solidarity with activists all over the world, sharing with, learning from and supporting each other. Our work is not done until we have a system which places pregnant people – not doctors or legislators – at the centre of their own care.

ARC also leads the important work of stigma-busting and opening up discussions about abortion in Ireland. The stigma and shame surrounding abortion did not disappear after the referendum. This work must continue so we can build on the amazing conversations that happened during the campaign. We will create spaces where we can heal individually and collectively and continue to change the conversation on abortion.

Grassroots feminist activism is powerful. It is at the core of all the work that ARC does because we believe in change from the ground up. Many of us have remained involved in ARC since the referendum because we know we cannot give up now. There is a lot of work still to be done and we will always need to fight to protect the rights we won. The anti-choice lobby in Ireland has not disappeared, and we need to remain vigilant about how the legislation is being implemented, to push for further improvements and to ensure that our hard won rights are not chipped away. We will march together again at the March for Choice in September to show that we are still here, we are powerful and we will not rest until no one is left behind.

When we work together, like we did during the Repeal campaign, we can achieve the incredible. Movements are all about the people who make and drive them. We needed you during the referendum campaign and, in order to have truly accessible and equitable abortion care in Ireland, we still need you now! We need you to help us with our work on access and provision of care, stigma-busting and global solidarity. We need people to help us with events, admin, fundraising, research, policy, graphic design, social media and organising the 2019 March for Choice. The power to change the future is in our hands.

People from Ireland who need abortions are still calling our helpline, asking for our advice and support, and they are still travelling. In just one weekat the end of March 2019 we spent over £5,000 helping clients from Ireland.

In January we helped a client who had been refused a termination in Ireland, who wasturned away and told to wait another month to see if she miscarried a non-viable pregnancy. Can you imagine? She said: “This is not what I voted for.”

Yes, we’ve come a long, long way since 12 months ago.And yes, the legislation and provision in Ireland helps some – even most – people in Ireland who need an abortion. But ASN is still getting calls. And those calls are coming from those who most need our help…