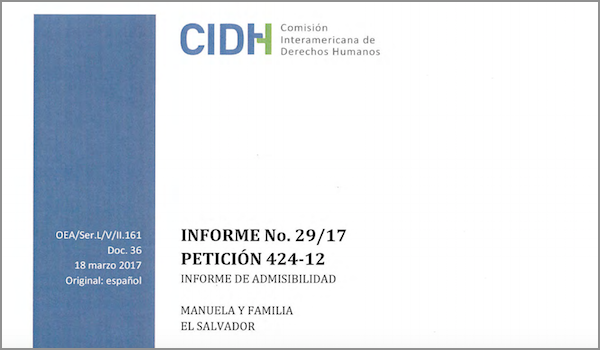 The Inter-American Commission on Human Rights (IACHR) announced it will hear the case of Manuela, a Salvadoran woman wrongfully imprisoned after having an obstetric emergency who later died from untreated Hodgkins lymphoma in prison.

In its report, the IACHR states that it is admitting Manuela’s case after determining that the government of El Salvador failed to provide access to justice for Manuela and her family, citing failure to provide her with adequate defence counsel.

In 2008, Manuela, a 33-year-old Salvadoran woman with two young children, suffered a complication giving birth during her third trimester. From the moment she arrived at the hospital, doctors treated her as if she had attempted an abortion and immediately called the police. She was shackled to her hospital bed and accused of murder. She was later convicted to 30 years in prison on charges of aggravated homicide without ever having had a chance to meet with her lawyer, and without having an opportunity to speak in her own defense.

After several months in prison, Manuela was diagnosed with advanced Hodgkin’s lymphoma, a disease that could have been the cause of her miscarriage and that could have been treated earlier with proper medical attention in prison. When she finally received chemotherapy it was too little, too late. Manuela died in jail in 2010.

“The state failed Manuela, her children and her family,” said Morena Herrera, Executive Director of Agrupación Ciudadana. “She is one of Las 17 and she should still be with us today, but untreated cancer prevented her from continuing to fight for freedom. Now we await justice and hope the Salvadoran government recognizes the human rights violations Manuela suffered for the sake of her dignity and her children.”