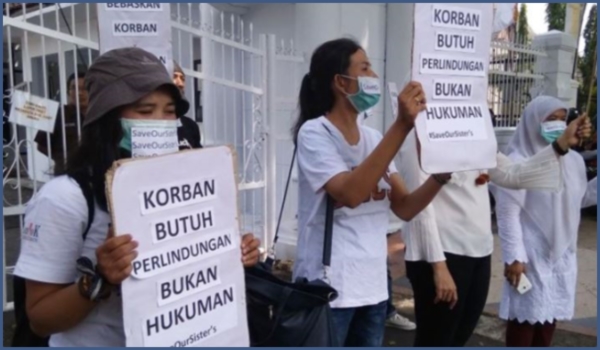 On 13 August 2018 we published a report that a 15-year-old girl on the island of Sumatra had been released the previous week on “humanitarian grounds” after having been in jail for a month. Although she had become pregnant after having been raped repeatedly by her brother, she was arrested and imprisoned for having had an illegal abortion. The brother did not know she could get pregnant. He was imprisoned for two years for sexual abuse. The girl’s case received widespread media coverage in Indonesia, leading to calls from women’s and human rights groups for her release, and for the legalisation of abortion and other guarantees for women’s reproductive rights.
On 24 September, a news article was published by an Australian media source, which referred to a Jakarta Post report, which said: “An appeal against the acquittal of a 15-year-old rape victim who was charged with illegal abortion in Indonesia has been condemned by local activists, who say the move is a backward step for the protection of women. A regional prosecution office launched the appeal, saying it wanted the case to serve as a lesson to others considering aborting a pregnancy.”
On 11 October, wanting to learn whether the girl might be sent back to prison, we wrote to Samsara, a Campaign member, to ask whether it was true and if so, what action was being taken and whether we could support it. They replied that they were aware of the appeal but not the outcome, so they checked what the status was with the Konsorsium Perempuan Jambi, the local activist consortium in Jambi, where the case had taken place. An appeal against the girl’s release had indeed been tabled by the local prosecuting attorney on 14 September. But the 23 September news report regarding the appeal, the only publication about it we had seen, was not up to date. The appeal had in fact been rejected by the Jambi court. The girl was still free and in recovery, supported by the local government and Konsorsium Perempuan Jambi, who remain committed to her case. The journalist who had written the story about the appeal had been in touch at one point with the local group, but she had not replied when contacted about the outcome of the appeal.
Samsara concluded: “We have followed this case since July 2018, and we have been working closely with Konsorsium Perempuan Jambi, who initiated the petition to demand justice for the girl. We contacted them again when you wrote to us, and we were then able to learn from them what was actually taking place. In our opinion, this case has had a good result because of strong support from many organisations, both at the national level and from the local coalition. Our joint advocacy work led to us developing a successful strategy, both to support the girl’s recovery, to campaign on this issue, and lobby the Judicial Commission at the state level to release her from the threat of any further prosecution. At the time we first found out about this case, there was minimal information coming from the local news media. Many articles in international media also helped to give positive publicity to this case. We have learned a lot from the advocacy work, about how to ensure that this girl’s rights as a victim were protected and for the case to be resolved in her favour. Our network in Jambi also appreciated the response from you and the attention you gave to this case. Learning from all this, we believe that the discussion about abortion in Indonesia still needs space to grow. We have more resources now, so if there is something more that we can work on together, whether in relation to this case or any other, please let us know.”
SOURCES: abc.net.au, by Tasha Wibawa, 24 September 2018 ; E-mail correspondence in October 2018 with Samsara. PHOTO