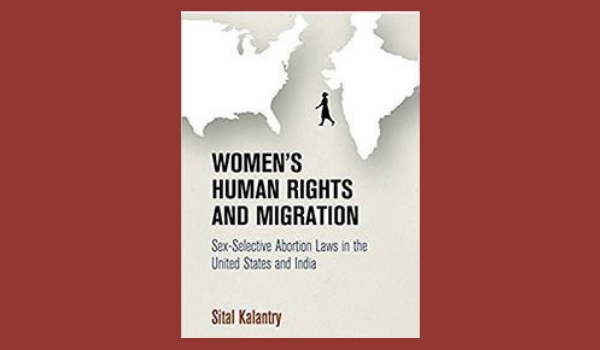 “Some of the most hotly contested international women’s rights issues today arise from the movement of peoples from one country to another and the practices they purportedly bring with them. In Women’s Human Rights and Migration, Sital Kalantry focuses on immigrants of Asian descent living in the United States who are believed to abort female fetuses because they do not want a female child. While sex-selective abortion is a human rights concern in India, should we, for that reason, assume that the practice undermines women’s equality in the United States? Although some pro-choice feminists believe that these prohibitions on sex-selective abortion promote women’s equality, other feminists fiercely oppose such laws, characterising them as a Trojan horse in the larger pursuit to overturn the reproductive rights guaranteed by Roe v. Wade. Nearly half of state legislatures in the United States have proposed laws restricting sex-selective abortion since 2009 and nine have adopted them.

“Kalantry argues that traditional feminist legal theories and international human rights law fail to provide adequate guidance in examining the human rights implications of the reproductive practices of immigrant women, evidenced by the fact that both supporters and opponents ground their claims in women’s equality. She advocates instead for a context-based approach that is open to the possibility that sex-selective abortion practices will have significantly different human rights implications when they emerge in different national contexts. The product of extensive empirical and interdisciplinary research, Kalantry’s book investigates the actual occurrence of sex-selective abortion among Asian Americans, the social and cultural contexts in which women in the United States and India practice sex-selective abortion, and the consequences of the laws in each country for women’s equality. This book develops a transnational feminist legal approach to examining and legislating contested acts that result from migration.”