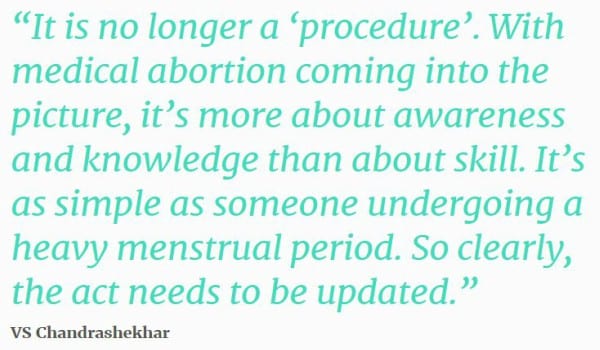 As high as 80% of abortions in India are with medical abortion pills. Pratigya Campaign for Gender Equality and Safe Abortion recently commissioned a study with the Centre for Media Studies on “Availability of medical abortion pills in the urban markets of four Indian states (Bihar, Maharashtra, Rajasthan and Uttar Pradesh)”. This study covered 1,008 retail chemists to understand the awareness levels and attitudes of the chemists stocking and selling the pills. It found that in Rajasthan, none of the chemists interviewed provided MA pills, only 1.2% did in Maharashtra, 37.8% did in Bihar, and 66% did in Uttar Pradesh.

The findings showed that over-regulation, legal barriers, the requirement of collecting prescriptions, frequent visits by drug inspectors, and concerns about side effects of the pills were all cited as reasons for not stocking them. Over-regulation has arisen in response to efforts to reduce the skewed sex ratio through a law banning use of ultrasound scans for fetal sex determination. Because of this law, two common misunderstandings have arisen: first, that all abortions are sex-selective and second, that the law does not permit abortions. The visits by drug inspectors often make chemists doubt the legality of abortions (43% believed all abortions are illegal). Hence, they were afraid of prosecution if they provided the pills.

In 2002, the Drug Controller General of India approved the use of a combination of mifepristone with misoprostol for early abortion, as a safe and simple method for women who may have otherwise faced barriers in accessing safe abortion care. However, India’s MTP Act allows only obstetrician–gynaecologists and physicians trained in surgical abortions to prescribe medical abortion pills. The World Health Organization guidelines, on the other hand, say that with simple training, nurses, midwives, pharmacists and other mid-level providers, such as trained ayurveda, unani, and homeopathy doctors, can provide medical abortion pills for early abortion. Based on the WHO guidelines, India has over 4,230,000 healthcare providers who meet the requirements for providing medical abortion pills, while only 65,000 senior providers within the law’s restrictions currently exist.

Manisha Gupte of Masum in Pune told us that in their mapping study of access to safe abortion in Pune district, Maharashtra state, they found an important shortage of abortion pills via chemists. Sometimes, only one of the two types of pill is sold, or inadequate amounts of both pills are sold, with inaccurate instructions on usage. Private doctors, she says, were also charging 5-10 times more for the pills, while government doctors weren’t keen to prescribe in case the woman came back with severe bleeding. The connection with being prosecuted for sex selection was also an influence.

The Pratigya study calls for expanding the provider base, de-linking sex-ratio and medical abortion, improving the knowledge of chemists on medical abortion provision, and increasing awareness among women.These changes were supported by both Rupsa Malik of CREA and VS Chandrashekar of the Foundation for Reproductive Health Services India, given the safety record of the pills and the fact that their use has greatly reduced unsafe abortions and their consequences in India. They were interviewed for the The Quint’s article on the study.