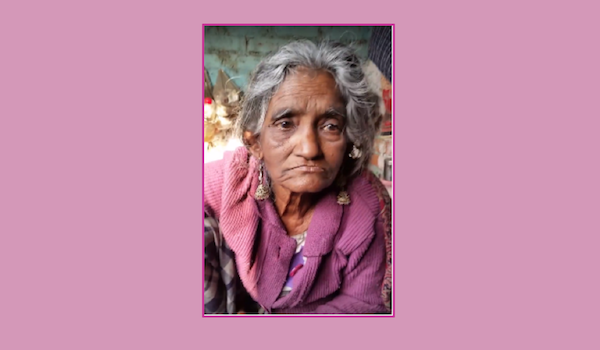 On Saturday 17 March 2017 a warrior for justice – Jaitun – commonly referred to as ‘Amma’, took her last breath and with the stillness of the night, like a rainbow that came to show her magnificence, her spirit passed on as her body lay on a scrap of mud floor outside a shop front, which she paid Rupees 1,500 per month to rent…

Amma’s life is anything but unremarkable, and it was her perseverance for justice that went on to achieve a historic ground-breaking judgement where she held the Indian government accountable for the lack of delivery on a number of its legally binding obligations which include reproductive health care and on the right to food.

Amma was an illiterate Muslim woman who for the past twenty years together with her daughter Fatima lived homeless, near the tomb of one the world’s most famous Sufi saints, Hazrat Nizamuddin, minutes from attractions such as India Gate and Humayun’s Tomb.

Amma had not always been homeless.  Prior to 1988 she owed a small room in a jhuggi (building in a slum) in the same locality, but the Delhi government’s re-development plans demolished her home. As a homeless person she faced constant harassment and intimidation to leave the area, from Delhi police and local thugs, particularly during Delhi’s ‘clean–up’ operations leading up and during the hosting of the Commonwealth Games.

On 29 May 2009, Amma’s daughter Fatima, who suffers from epilepsy, was denied medical care from the local hospital because she did not possess a BPL (below-the-poverty-line) card, and was forced to give birth, under a tree, in full public view, without access to skilled health care or medical guidance. It was then Amma took her quest for justice to the Delhi High court, and with the support of the Human Rights Law Network,filed a petition to seek accountability and redressal, and to ensure non- repetition for other women and girls.

At the time of Fatima’s public delivery, India was home to the highest number of women dying during pregnancy – 117,000 maternal deaths per year – accounting for 25% of the global total. According to the World Health Organization’s latest figures (2016) 45,000 maternal deaths take place in India ever year, which is an average of 5 women dying every hour. India’s maternal deaths now account for 17% of the global total, and for the last two consecutive reporting periods India has failed to meet its Millennium Development Goals target to reduce maternal deaths. India’s spending on health care (1.3%) of its Gross Domestic Product, continues to rank as one of the lowest in the world. Perhaps it is no coincidence that the Taj Mahal is not only a representation of undying love but also an iconic symbol of a woman who died during childbirth.

In a bid to reduce maternal and infant deaths, the government in April 2005 had launched the National Rural Health Mission (NRHM). The service guarantees under the NRHM include:  early registration of pregnancy before the 12th week; minimum of 4 antenatal check- ups, medical examinations such as weight, blood pressure, anaemia, identification of high-risk pregnancies and appropriate and prompt referral. None of these service guarantees had been provided to Fatima.

For the next year, Amma fought unfalteringly in her pursuit for justice. She overcame attempts from hospital/government employed personnel who took her to lawyers, she was tricked into placing her thumb print to drop her case; she was not swayed by bribes to drop her case as she said what happened to her daughter “is also happening to many other daughters”. Her case highlighted the stark gaps in the system, and the government’s failings to deliver the service guarantees under the NRHM, in addition to its lack of enforcement of legally binding right to food policies and programmes, and its ultimate failure to uphold and respect the human dignity of women and girls in India.

On 4 June 2010, the Delhi High court granted Amma a ground-breaking judgement, which for the first time in history held the government accountable for the denial of basic reproductive health services (as well as a preventable maternal death – Amma’s case was taken together with another woman’s case – Shanti Devi). The Court directed authorities to pay compensation. “These petitions focus on two inalienable survival rights that form part of the right to life: the right to health (which would include the right to access and receive a minimum standard of treatment and care in public health facilities) and in particular the reproductive rights of the mother. The other right which calls for immediate protection and enforcement in the context of the poor is the right to food …for the violation of the fundamental rights of Fatima by being compelled to give birth to Alisha [newborn] under a tree which is only on account of the denial of basic medical services to her under the various schemes.”

The judgement has since been used by countless lawyers and activists – in 400 cases across 36 courts in India and globally, not only as a source of inspiration but as a solid springboard to further justice.
SOURCE + PHOTO: Human Rights Law Network, April 2017