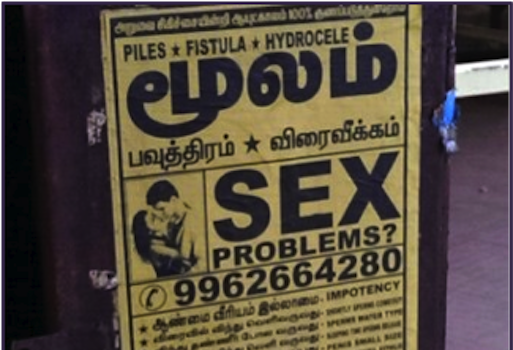 You may have spotted posters from train windows, as you enter stations, or at traffic signals that offer to solve your ‘sex problems’. Right from these unremarkable flyers touting unregistered medical practitioners, to over-the-counter (OTC) contraceptives that are dealt, as though, to fugitives, and the dark coloured polyethene bags that seal off sanitary napkins from the outside gaze, the enigma that surrounds transactions of sexual and reproductive health (SRH) services in the country, is only comparable to that which surrounds illicit drug trade. Social and cultural practice is to regulate even the most basic conversation on sexual and reproductive health and rights (SRHR), and bring it within the axes of ‘marriage’ and ‘procreation’, so much so that we have prominent judges of the high courts issuing ‘marriage’ as a sentence for rapists, post-conviction, as if submitting to matrimony is the ultimate atonement. This systemic epidemic of sex-shaming equals to most of us having no information whilst growing up, or being ashamed of our curiosity about our bodies, sex and desire. The utter absence of comprehensive sexuality education (CSE) also contributes to high maternal mortality rates, rampant early and child marriage, a strapping HIV-positive population as well as a significant unmet need for contraception.

It is in this climate that we at The YP Foundation decided to conduct a preliminary audit of government and non-government health centres in and around communities in the Delhi National Capital Region, where we impart comprehensive sexuality education. 18 young volunteers and staff from the Know Your Body Know Your Rights Program conceptualised and implemented an audit to assess the quality of SRH services for youth. They took on the role of …well, regular young people in need of condoms, birth control, pregnancy kits, HIV counselling, etc.

Here is what we found:-

Shame games
The National Adolescent Health Programme (Rashtriya Kishor Swasthya Karyakram; RKSK) guidelines 2014,perhaps the most progressive and comprehensive of the Indian policy landscape, stresses the importance of the presence of 3 components in every centre that provides SRH facilities: information, commodities and services. Now, regardless of the availability of commodities or services, the real challenge that the hospital and staff seemed to struggle with was information disclosure. How does one confide to staff who are uncomfortable to speak on the subject themselves?

We discovered along the way, that hospital staff had two ways of dealing with their unease. In most of our interactions, we encountered either:

Or, overt moralising, what I like to call the ‘circle of shame’ – shaming us for shaming them by requesting access to improper things, and subsequently bringing shame upon our family and ourselves.

Neither assuaged the experience.

“The chemist shop in the facility premises required doctor’s permission to buy a kit. Firstly, we were sent to three different rooms to get the CMO/doctor’s permission. In the third room, a female assistant lashed out at us saying, ‘Sharam nahi aati? Parents ki izzat mitti me mila di (Aren’t you ashamed of yourself? You are ruining your family’s honour).’ It would have been downright humiliating for any person let alone a distressed young girl. In the end, I wanted to be out of the hospital as soon as possible.”

Health care practitioners should ideally play the role of a facilitator. But increasingly, we began to observe that either consciously or unconsciously, they would slip into the role of a gatekeeper. A moralising ground does not qualify as a safe space, and in fact adversely contributes to mental trauma. 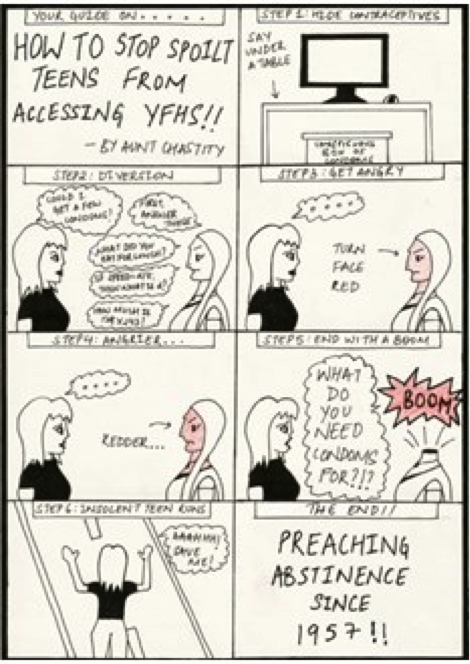 Sticky-stacky stigmas
It was also interesting to note that their stigma against talking about, leave alone treating, SRH services piggybacked somewhat comfortably on their stigmas attached to sex outside of the confines of marriage, which in turn piggybacked on their intolerance towards people of a different religion, weak academic performers, independent youth and a host of other seemingly unconnected things.

“The room was empty except for 3-4 doctors who looked like the ‘gossipy neighbourhood aunties’.”

Lack of signages
“And as we were about to find out, they behaved exactly in the same manner. What college, they asked. What subjects, what percentage. Do you live with parents? Are you sexually active? With more than one guy – this was not so much as asked as shouted. And then, are you Christian?”

On some occasions, the younger doctors seemed happy enough to treat the patient without passing judgement, but the older doctors and assisting nurses assumed the garb of a disciplinarian.

On other occasions, doctors were found to be selectively empathetic – privileging one SRH service over the other. There was a stark difference in the attitudes of some health care practitioners who were warm and helpful when it came to services such as contraception, HIV and STIs, but haranguing when it came to abortion.

On still other occasions, they were guilty of granting smoother SRH services to boys over girls; and upper middle class, English speaking patients, whilst reserving dispassionate judgement for everyone else – the peer educators would come out with lukewarm reports only to find a disillusioned fellow patient. So despite wielding our English-speaking class privilege, being at the receiving end of such differential treatment based on banal biases, made us sit up and think – what then, would be the treatment meted out to young girls from the communities we work in?

Information education and communication (IEC) material was available only partially and sporadically, across all centres.

“GTB Hospital is like a maze. It is a huge hospital and there is no clarity whatsoever as to which building one has to go to as there is a shortage of sign boards. It is not like the services are not available here, just that reaching the right place is a herculean task.”

Proactive disclosure of the gamut of SRH problems and services through intuitive flyers and sign boards that lead the way to counselling rooms and testing labs also can minimise patient-patient or patient-staff interaction, offering the former the benefit of privacy and shrouding them from harsh judgement and scrutiny of community moral police.

Due to the stigma surrounding most SRH services, especially HIV/pregnancy testing or counselling in the case of sexual contraception/abuse/violence, and the larger community’s likelihood to suppress and shame, creating safe spaces by guaranteeing privacy and confidentiality, also becomes doubly important to encourage young people to avail of these services. Unfortunately, there is no escaping nosy neighbours of neighbours anywhere in India, least of all at community health centres!

“It was an open room where all the patients stood in barely a line and just stated their problems in front of everybody. No privacy whatsoever.”

“One of the things that I didn’t like about this centre was that a patient having an upset stomach walked into the room, right in the middle of my abortion counselling session.”

On the whole, the team had mixed feelings on the pilot study. Their preliminary excitement regarding the ‘plain-clothes audit’ was short lived. The volunteers may have been assuming the guise of young people in need of counselling, contraception or kits, but their masks were fast rendered inconsequential. The slut-shaming and unsparing character assassination that accompanied the study was but directed at their realities. Such personal assault dampened their spirit and frustrated some of them to the point of tears. Both the government and non-government health centres were ridden with the same-old, age-old, patriarchal, sexist and non-secular bigotry transmitted by staff and communities who frequented their corridors. Uninterrupted treatment was accorded only to the PEs who conformed to their narrow ideals.

In the name of patient history, a person’s identity was dissected, its markers scrutinised: starting with gender, sexuality, class, religion, academic merit, and then moving on to an avalanche of micro markers – none of which was their business. Not surprisingly, the tendency to regulate a woman’s sexuality over a man’s was painfully evident, and how. Add to this mix, a trans person, a Dalit or a differently abled person and the experience could well be traumatic. We then wonder if the singular subject of this exclusive public health system is simply – an able-bodied Hindu man.

Youth Ki Awaaz (Voice of the Youth) is an independent youth-led online media and news platform, perhaps the largest in India. They are a partner organisation of the YP Foundation – Developing Potential of Young Peoplewww.theypfoundation.org. They are currently replicating this study in a more comprehensive manner in Lucknow, Uttar Pradesh. The study is part of the larger objective of creating knowledge where young people set their own research agenda and implement it.