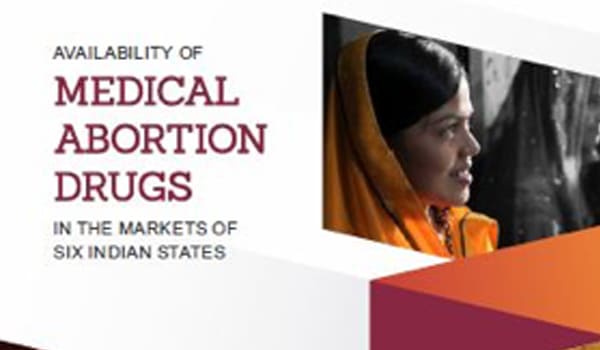 This study was carried out in January to March 2020, hence before Covid-19, by the Foundation for Reproductive Health Services (FRHS) India and Pratigya Campaign for Gender Equality and Safe Abortion. It covered six states – Punjab, Haryana, Tamil Nadu, Madhya Pradesh, Delhi, and Assam. The field work was carried across 26 cities (five in each state plus Delhi) among 1,500 retail chemists.

The findings reveal an overwhelming shortage of MA drugs as follows: Punjab (1%); Haryana (2%), Tami Nadu (2%), Madhya Pradesh (6.5%), Delhi (34%) and Assam (69.6%). These findings are in line with those of a similar study carried out in late 2018 in the markets of Rajasthan and Maharashtra, which together indicate very poor access in seven of 10 states in India.

53.4% of all chemists cited legal issues/barriers such as strict regulations, specific communication not to sell MA drugs by the local drug authority and government ban as reasons for not stocking MA drugs. 30.8% reported that low demand for these drugs was a deterrent. 43.9% in Madhya Pradesh and 38.2% in Delhi reported “too much paperwork/documentation requirement” as a reason for not stocking MA drugs. 36.8% of chemists in Assam who were not selling MA drugs at the time of the survey thought they were harmful for women’s health.

The study also busts the common misconception that MA drugs are being purchased over the counter without prescription. Chemists reported that 71% in Assam, 84% in Delhi, 100% in Haryana, 97% in Madhya Pradesh, 80% in Punjab and 97% in Tamil Nadu came with a prescription. Six out of ten purchasers were men, four were women.

The primary reason for greater scrutiny of MA drugs by drug regulatory authorities is the misconception that MA drugs are being misused for sex-selection. The study recommends addressing this misconception; harmonising Central Drugs Standard Control Organisation approvals and requirements with the Medical Termination of Pregnancy Act; amending MTP Rules to allow MBBS doctors to prescribe MA pills, increasing investments in safe abortion communication and providing support to women who access MA pills by setting up toll-free helpline numbers.