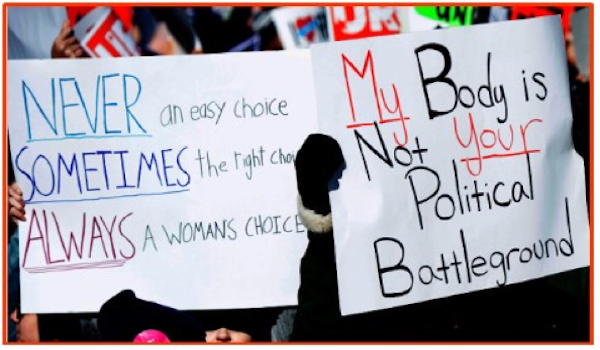 An excellent discussion of why anti-abortion clinic protesters are not exercising free speech.

US lawyer and social critic Wendy Kaminer asks: “Is feeling intimidated, being confronted and ‘stressed’ by people who oppose abortion rights, sometimes the price of free speech”?

In the UK, abortion clinic demonstrations have been on the rise. While they are still a far cry from the scenes that can be witnessed in the United States, they have spread in recent years to the point that many clinics now routinely experience some form of demonstration at their doors.

Generally, protests at the clinics operated by the British Pregnancy Advisory Service (BPAS) involve up to eight people, often with large banners of dismembered fetuses, pressing literature into women’s hands along with a small plastic fetus. There are no crowds, and usually access is not obstructed.

Nonetheless, abortion clinic protesters can significantly affect potential patients’ sense of security when seeking care. As an increasing number of women have elected early medical abortion, BPAS has moved our services to smaller, more convenient premises closer to where women live their daily lives. At clinics now located on small residential streets, even a handful of protesters appears a crowd, leaving women with no way into the clinic without passing by and risking a confrontation. Increasingly, these protesters also wear cameras around their necks. They claim that the purpose is to protect themselves from false claims of harassment, but for women visiting the clinic the unsettling fact is this: They are being filmed…

…The space outside a clinic is not a political theatre. It is not a public square. Women seeking abortion advice and care are not students arriving on campus to debate the rights and wrongs of abortion. They are not members of Parliament arriving at the House of Commons to vote on a bill to lower the time limit. But just as importantly, this is not a debate – and we denigrate the word itself by suggesting that the right to stand outside a clinic and lie to women is part and parcel of the right to freedom of speech and of the wonderful free exchange of ideas that shapes the democratic process. These are not “ideas”; they are fantasies and deceptions, targeted at a particular patient group as they attempt to access confidential, well-regulated health care…