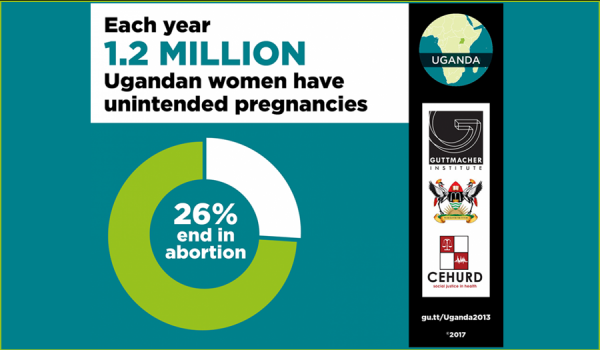 In 2003, 294,000 induced abortions were estimated to occur each year in Uganda. In the first research on abortion incidence since then, data from 418 health facilities were used in 2013 to estimate the number and rate of induced abortion nationally and by major regions. The methodology used in both studies was comparable and permitted an assessment of trends between 2003 and 2013.

The authors conclude that the majority of pregnancies to Ugandan women were still unintended. And although the use of modern contraception has increased, it seems a large proportion of women/couples are having difficulty practising contraception effectively.

As regards abortion, according to the Guttmacher Institute’s press release about the article, although Ugandan law explicitly allows abortion to save a woman’s life and the 2012 National Policy Guidelines and Service Standards for Sexual and Reproductive Health and Rights permit abortion in cases of fetal anomaly, rape and incest, and HIV, in practice, legal abortion is both difficult to obtain and to provide. The country’s abortion laws and policies are inconsistently interpreted by law enforcement officials and the judicial system, and many providers and women remain unaware of the circumstances under which abortion is legal. As a result, most abortions in Uganda are clandestine procedures, which are often unsafe. Moreover, notwithstanding the Ugandan government’s efforts to improve post-abortion care services, stigma and fear of mistreatment are significant barriers for many women in need of these services.