Home » News » Incest case attests that, in Costa Rica, abortion is legal in name only 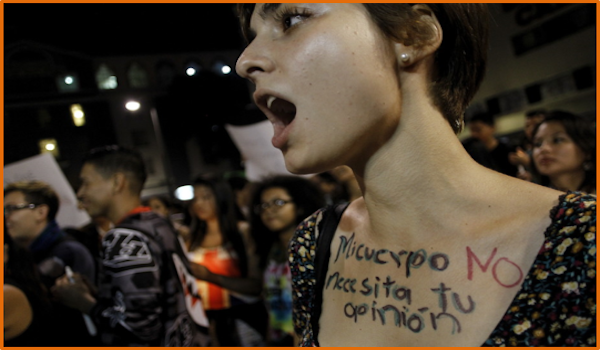 In Costa Rica, women have had the right to abortion since 1970. Well, more or less. The concept of the “unpunished abortion”, established in Article 121 of the Penal Code, permits the termination of a pregnancy as long the procedure is consensual, performed by a doctor (or if necessary by an authorised obstetrician), and is the only way to protect the life or health of the woman. While therapeutic abortion may thus be permissible, in practice the public hospitals where most Costa Ricans receive care refuse to offer abortions except when a woman’s life is in imminent danger…

This difference between the law and social practice is now the source of a legal battle that is dividing Costa Rican society. The case is in question involves a 12-year-old girl, pseudonym Andrea, who was impregnated by her father and has been prevented from terminating her pregnancy.

Not a secular nation

…The girl’s life story started making headlines in February 2017 when her mother, using the only resource at her disposal to try to activate the judicial system, went public about the sexual violence Andrea had suffered from her father. Her mother said: “After she told me about what happened with her father, she became extremely anxious and told me she didn’t want to exist in this world any longer because of everything that had happened.” Andrea is depressed, says her mother, barely eating, suffering extreme nausea from the pregnancy and – critically – says she does not want to have the baby.

Rather than call for Costa Rican law to be enforced, the media have offered a platform for religious figures to voice their opinions. The public debate about Andrea’s case is being approached not from a medical or legal perspective but a Christian viewpoint. Churches and anti-choice organisations have contacted the girl and her mother, trying to convince them not to pursue an abortion.

But there have also been some offers of help. The Asociación Ciudadana ACCEDER, of which I am a member, offered legal counsel to help Andrea’s family make her case to the government.

The case demonstrates that even when confronted with a 12-year-old incest victim, who says that she wants to die and to abort her pregnancy, Costa Rica’s legal and medical establishment do not offer legal or medical responses. This goes completely against the recent recommendations from the Organization of American States’ Expert Committee that follows up on the Belém do Pará Convention on sexual violence and child pregnancy.

Strategic litigation will be abortion rights’ groups’ main vehicle for change, as it was following the cases of Ana and Aurora, two Costa Rican women denied abortions despite having dangerously malformed fetuses. They each took their case to the Inter-American Commission on Human Rights. The highly visible international cases of Ana and Aurora have compelled the Costa Rican government to write a technical guidelines that it insists will further enshrine legal protection for medical personnel who perform an abortion to avoid endangering the life and health of a pregnant woman. And none too soon; stories of dangerous clandestine abortions circulate.

As for Andrea, she will become a mother at 13, giving birth to her father’s child.