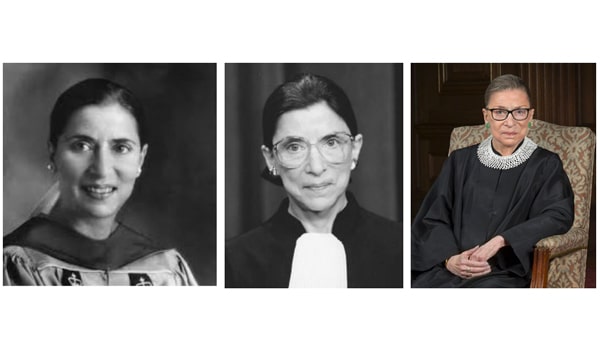 Ruth Bader Ginsburg was the second woman ever to sit on the United States Supreme Court and is known as the legal architect of the modern women’s movement. She, more than any other person, pointed out that many laws encouraged gender discrimination instead of guaranteeing equal rights and opportunities to all, as was intended by the United States Constitution. Her interest in the law started in primary school, when she wrote articles for her school newspaper about the Magna Carta.

She attended Cornell University, where she graduated with high honours in government. She married Martin Ginsburg, a law student, who predeceased her in 2010. She went on to Harvard Law School, where she served on the Law Review. There she was told that she and her eight female classmates – out of a class of 500 – were taking the places of qualified males. She transferred to Columbia University, where she graduated at the top of her class and then was unable to find a job. In 1970, she co-founded the Women’s Rights Law Reporter, the first law journal in the US to focus exclusively on women’s rights.

After working for a district judge, she joined the faculty of Rutgers University, where, in order to keep her job, she wore overly large clothes to hide the fact that she was pregnant. In 1972, she co-founded the Women’s Rights Project at the American Civil Liberties Union (ACLU), and in 1973, she became the Project’s general counsel. The Women’s Rights Project and related ACLU projects participated in more than 300 gender discrimination cases by 1974. As the director of the ACLU’s Women’s Rights Project, she argued six gender discrimination cases before the Supreme Court between 1973 and 1976, winning five of them. Her strategic advocacy extended to terminology; she used “gender” instead of “sex” after her secretary suggested the word “sex” would serve as a distraction to judges.

She was named a judge on the United States Court of Appeals for the District of Columbia in 1980 by President Jimmy Carter, where she served until 1993. In 1993, President Bill Clinton nominated her to the Supreme Court. She was confirmed by the Senate in a vote of 96 to 3, becoming the 107th Supreme Court Justice and its second woman jurist after Sandra Day O’Connor.

She served on the Supreme Court for over 27 years. She wrote 35 significant opinions, two important concurring opinions, and three selected dissenting opinions. She was a strong voice for the separation of church and state, a major legal issue today. In 1999, she won the American Bar Association’s Thurgood Marshall Award for her contributions to gender equality and civil rights. In 2013, on the 40th anniversary of Roe v Wade, she criticised the decision in Roe as terminating a nascent democratic movement to liberalise abortion laws which might have built a more durable consensus in support of abortion rights. In 2016, she published her first book, entitled My Own Words, which is a collection of her speeches and writings. One day before her death, she was honoured on Constitution Day and was awarded the 2020 Liberty Medal by the National Constitution Center.

She was barely five feet tall and weighed only 100 pounds, but she trained every day with a trainer, who wrote a book about her. She died at home of pancreatic cancer at the age of 87 on 18 September 2020. Mourners gathered at the Supreme Court after the announcement of her death.

The New York Times obituary said: “As Justice Ginsburg passed her 80th birthday and 20th anniversary on the Supreme Court bench during President Barack Obama’s second term, she shrugged off a chorus of calls for her to retire in order to give a Democratic president the chance to name her replacement. She planned to stay “as long as I can do the job full steam,” she would say, sometimes adding, “There will be a president after this one, and I’m hopeful that that president will be a fine president.”

One day after her death, there is already a “rapidly unfolding political fight over replacing her”, including whether or not to await the election of a new president before doing so.

A book about her by Eleanor H Ayer, published in 1994, described her as “fire and steel on the Supreme Court” – a fitting way to remember her.