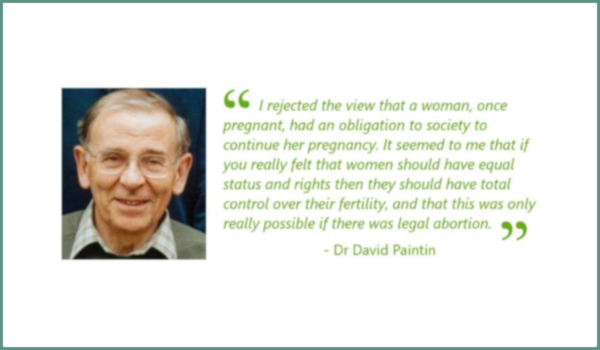 David Paintin Hon FFSRH MB ChB FRCOG was part of the group from the Abortion Law Reform Association (ALRA) in Britain, which he joined in 1963, that supported Lord Silkin and MP David Steel during the parliamentary debates that resulted in the passage of the 1967 Abortion Act. He also worked hard to increase the acceptability of abortion. Hepromoted innovation and good practice through his involvement with the Royal College of Obstetricians and Gynaecologistsand by lecturing on the provision of legal abortion to medical students, family planning doctors and gynaecologists throughout the country.

David qualified in Bristol in 1954.He trained under the supervision of Professor Dugald Baird, in Aberdeen, also a strong abortion rights advocate, before becoming a reader in obstetrics and gynaecology at St Mary’s Hospital Medical School, London in 1963. From 1963 to 1991, based at St Mary’s Medical School, he organised the teaching of medical students and also as an honorary consultant, provided NHS abortion services for Paddington and North Kensington. He was a chair of the Birth Control Trust (1981-1998) and a trustee of thePregnancy Advisory Service(1981-1996) and theBritish Pregnancy Advisory Service (1996-2003).

He continued to work on abortion issues.He was editor of the British Journal of Obstetrics and Gynaecology for a period, and became Emeritus reader in obstetrics and gynaecology at St Mary’s Hospital.In a recent book, he reflected on the legal debates that led to the 1967 Abortion Act and its subsequent implementation, and attempts by parliamentarians to undermine and restrict abortion law in Britain in the 1970s and 1980s. He died aged 88 on 30 March 2019 after a long illness.