Background: Medical abortion with mifepristone and misoprostol was introduced in Norway in 1998, and since then there has been an almost complete change from pre-dominantly surgical to medical abortions. We aimed to describe the medical abortion implementation process, and to compare characteristics of women obtaining medical abortion. [ADDED FROM MAIN TEXT: Norway has a public health system and every department of obstetrics and gynaecology in the country is obliged to provide abortions completely free of charge. Only physicians are entitled to perform abortions, but delegation to other health professionals under supervision is not prohibited.]

Methods: Information from all departments of obstetrics and gynaecology in Norway on the time of implementation of medical abortion and abortion procedures in use up to 12 weeks of gestation was assessed by surveys in 2008 and 2012. We also analysed data from the National Abortion Registry comprising 223 692 women requesting abortion up to 12 weeks of gestation during 1998–2013. 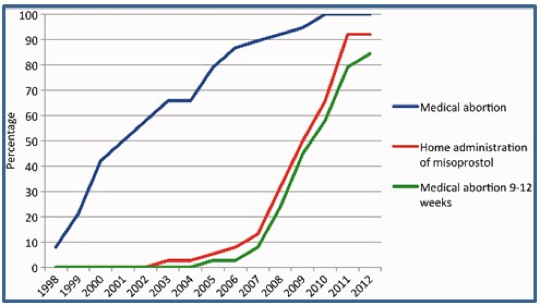 Conclusions: Norwegian women have gained access to more treatment modalities and simplified protocols for medical abortion. At the same time they obtained abortions at an earlier gestational age and the waiting time has been reduced.