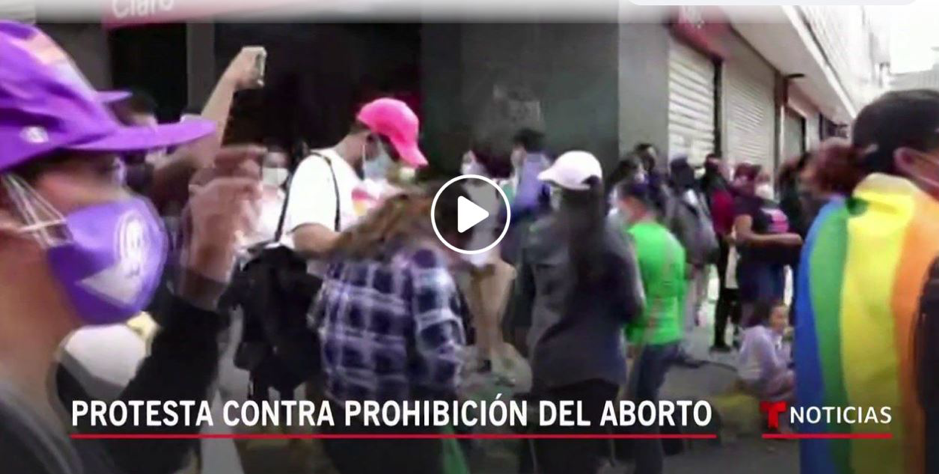 VIDEO and NEWS REPORT: Women protest against the prohibition of abortion

The National Congress of Honduras approved a reform of Article 67 of the Constitution that establishes the prohibition and illegality of the termination of pregnancy by a pregnant woman or by a third party and creates a constitutional shield that makes it impossible to legalize the practice of abortion in Honduras in the future.

These amendments represent a clear violation of the right to equality of women and girls, in addition to violating the principle of proportionality. The imposition of pregnancy and consequent motherhood on someone without their consent implies that the rights of the pregnant woman or girl are considered inferior to the rights of the embryo/fetus, depriving them of their fundamental rights as full citizens. For example, access to treatment for an ectopic pregnancy could be refused, a girl who has been raped would be forced to continue with the pregnancy, and a woman could be forced to stop her treatment for cancer while pregnant. However, there are other ways for the legal system to protect the biological development of human beings , that is, by ensuring that the sexual and reproductive rights of women in Honduras are not restricted under any circumstances.

The reform is based on ideological motivations that are not based in science, but with the objective of denying women and girls the full range of essential reproductive health services. Its objective is to prohibit any procedure that interrupts a pregnancy, even in extreme cases, including even to save the life or health of the woman. At other moments, comparable intentions have sought to justify restrictions on access to in vitro fertilization and/or emergency contraception. In general, these strategies aim to deny the ability of women to make autonomous decisions with respect to their fertility.

This law goes against the recognition of the liberty and autonomy of women and girls, and seeks to impose forced motherhood, even in extreme situations, such as in cases of risk to life or health, incest or rape, in which a termination would be justified for therapeutic reasons. Yet it is precisely in these kinds of circumstances when continuing the pregnancy or not should be a free, responsible and informed choice. Also, the bill imposes a form of torture on the woman or girl, reducing her to a condition analogous to being an incubator, without autonomy, making her into an object and stripping her of her human dignity. The restriction of her rights is not accompanied by any gains or added forms of protection. Instead, it leads to serious violations of her right to liberty, personal integrity, a private life and the right to health.

The right to life is a fundamental human right; it is necessary for the enjoyment of all other human rights. International human rights law recognizes that this essential right is acquired only from the moment of a live birth; it is not absolute. International and regional human rights bodies, as well as courts around the world, have clearly established that any prenatal protection must be compatible with women’s ability to make autonomous decisions about their lives, such as their rights to life, health, dignity, equality and autonomy, as well as other basic human rights. In this regard, the Human Rights Committee (HRC) adopted General Comment No. 36 on the right to life (on Article 6 of the International Covenant on Civil and Political Rights), which states that:

“While States parties may take measures to regulate terminations of pregnancy, such measures must not result in a violation of the right to life of a pregnant woman or girl, or of her other rights under the Covenant. Thus, restrictions on a woman’s or girl’s ability to seek an abortion must not, inter alia, endanger her life or subject her to physical or mental pain or suffering in a manner which violates article 7 of the Covenant, nor entail discrimination against her or arbitrary interference with her privacy. States parties must provide safe, legal and effective access to abortion when the life or health of the pregnant woman or girl is at risk, or where carrying a pregnancy to term would cause the pregnant woman or girl substantial pain or suffering, particularly when the pregnancy is the result of rape or incest or is not viable. In addition, States parties may not regulate pregnancy or abortion in all other cases in a manner contrary to their duty to ensure that women and girls do not have to undergo unsafe abortions, and should review their abortion laws accordingly. For example, they should not take measures such as criminalizing pregnancies of unmarried women or applying criminal sanctions against women and girls who undergo abortion or against medical service providers who assist them in doing so, since the adoption of such measures forces women and girls to resort to unsafe abortion.”

International human rights law does not recognize the protection of the right to life from conception because it considers that this would significantly interfere with women’s human rights, health and reproductive autonomy. The practice of abortion under unsafe conditions is closely related to its criminalization. In turn, the Convention on All Forms of Discrimination against Women – CEDAW, to which Honduras is a signatory, in its General Recommendation No. 24, indicates that legislation punishing abortion should be amended to abolish punitive measures imposed on women who have undergone abortions.

The November 2012 ruling of the Inter-American Court of Human Rights (the Court) in the case of Artavia Murillo and Others v. Costa Rica generated significant jurisprudence in the area of women’s human rights. The Court noted that the right to reproductive autonomy is also recognized in Article 16(e) of the Convention on the Elimination of All Forms of Discrimination against Women, which states that women have the right to decide freely and responsibly on the number and spacing of their children and to have access to the information, education and means to enable them to exercise these rights. The Inter-American Court’s ruling concluded that it is not admissible to grant the status of person to the embryo (Para. 223) and that the protection of the right to life under Article 4 (Right to Life) of the American Convention is not absolute, but rather gradual and incremental according to its development (paragraph 264). The Court also established that the rights to a private life and personal integrity are directly and immediately linked to health care. The lack of legal protections that consider reproductive health can result in an impediment to the right to reproductive autonomy and freedom. There is therefore a connection between personal autonomy, reproductive freedom, and physical and mental integrity (Para. 147).

Likewise, the Court stated that “[t]he right of access to the highest and most effective scientific progress for the exercise of reproductive autonomy and the possibility of forming a family derives from the right to have access to good quality reproductive health services and assistance and, consequently, the disproportionate and unnecessary de jure prohibition or de facto restrictions on exercising the reproductive decisions that belong to each person” (para. 150). The jurisprudence of the Inter-American Court of Human Rights in this case is of special relevance for legislative proposals and trials aimed at regulating and implementing health policies that guarantee women’s access to health services for the voluntary termination of pregnancy, in accordance with the human rights to freedom, autonomy and dignity of women.

Societies dominated by patriarchal precepts restrict the free exercise of sexual and reproductive rights and women’s access to safe abortion. In place of these precepts, new social values have emerged regarding the role of women in society, as outlined in the goal of gender equality, which is one of the United Nations’ Sustainable Development Goals 2030.

These values are reflected in necessary paradigm changes and in the strengthening of women’s autonomy in matters of sexuality and reproduction. In this Constitutional reform, the stereotype of women as mothers and caregivers only is reinforced. They would be forced by the state to carry every pregnancy to term without being able to choose or control their life project but become a mere receptacle of and vehicle for unborn life.  In a day and age that increasingly accepts the principle of gender equality across the world, it is unacceptable to adopt legislation that impedes access to health care and increases the risks to life and health associated with unsafe abortion.