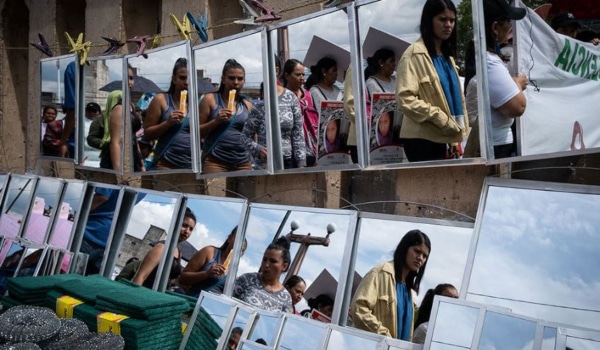 Honduras has a total abortion ban, but there are an estimated 50,000 to 80,000 clandestine abortions in the country each year, according to the Center for the Rights of Women.

In the absence of government action in support of women’s lives, Honduran women have formed informal networks to spread accurate information on abortion and improving post-abortion care at hospitals.In high schools and colleges, few qualified professionals talk to young women about sexuality education, prompting many young women who become pregnant to seek out clandestine abortions, activists say. So volunteers with an information phone line called La Linea focus on young women and adolescents, and post fliers around college campuses and high schools. “We want to reach young women because we know that they don’t have anywhere else where they can find this information,” one volunteer said.

Callers to the phone line often ask about birth control, abortions and morning-after pills, which are also banned in Honduras. Many callers ask for misoprostol or other abortion services, but the hotline doesn’t help women get pills, because doing so is illegal and could cause the line to be shut down. Instead, they focus on sharing accurate information and promoting bodily autonomy.

Ana Ligia Chinchilla, a doctor at a post-abortion care clinic in Tegucigalpa, treats women with complications from abortions. Many arrive haemorrhaging or with a perforated uterus from a dangerous abortion.One in 23 maternal deaths in Honduras in 2017 was the result of an unsafe abortion, according to data from the Health Secretary. But the number could be even higher given that women often try to hide their abortions for fear of the legal consequences, according to a recent Human Rights Watch report.

In Honduras, it is “dangerous just to be a woman”, says Jinna Rosales, a feminist activist and director of human rights organisation Acción Joven Honduras (Youth Action Honduras).

Honduras has one of the highest rates of sexual violence in Latin America. A woman raped every three hours. Feminist organisation Yo No Quiero Ser Violada (I Don’t Want to Be Raped) was founded followed the 2018 murder of a 27-year-old medical student who was shot dead when she refused to cooperate with armed assailants who boarded a bus and tried to sexually abuse her and a friend. The group call for the adoption of a national protocol for victims and survivors of sexual violence, and for healthcare professionals who attend survivors of sexual assault, which do not currently exist.

The absence of a protocol leads to incomplete care and confusion over what services doctors can legally provide. Some doctors may only run tests for sexually transmitted diseases and pregnancy without providing preventive medication. In other cases, doctors refuse to treat patients because they incorrectly believe that the woman must file a police report against the aggressor before they can offer medical care. The World Health Organization has published “Guidelines for medico-legal care for victims of sexual assault” and recommends that countries adapt them to their own national context.