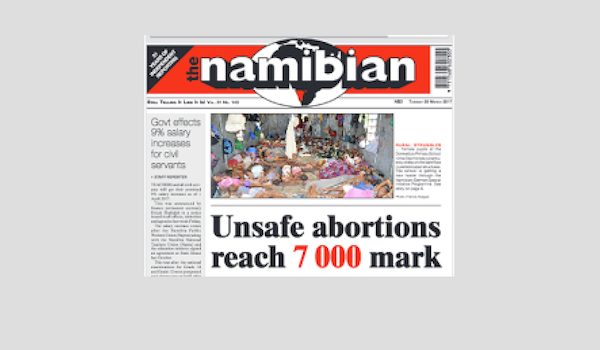 ‘500 women die from abortion every year.’ Perhaps such should be the news headlines to make Namibians understand we have a crisis, and all because of a lack of empathy.

The Namibian reported that Health Minister Bernard Haufiku tried to highlight the magnitude of the problem of unsafe abortion when he announced that more than 7,300 women had been treated at public health centres in 2016 due to complications of illegal abortions. In fact, he said the figure could be as high as 10,000 – or at least 27 cases a day.

He called for decriminalisation of abortion, which is restricted under the Abortion and Sterilization Act of South Africa (1975), which Namibia inherited at independence in March 1990. According to the UN Population Division website (2002), abortion is allowed in Namibia only when the continued pregnancy endangers the woman’s life or constitutes a serious threat to her physical health or a risk of permanent damage to her mental health; when there exists a serious risk of a physical or mental defect in the child so as to be irreparably seriously handicapped; as a consequence of rape or incest; or when the fetus has been conceived in consequence of illegitimate carnal intercourse and the woman is, owing to a permanent mental handicap or defect, unable to comprehend the implications of or bear the parental responsibility for the “fruit of coitus”.

In addition to the woman’s physician, two other physicians are required to certify the existence of grounds for an abortion. Abortions must be performed by a medical practitioner in a government hospital or an approved medical facility. Any person performing an abortion in violation of these provisions is subject to imprisonment of up to five years and/or payment of a fine.

The Namibian editorial reporting the Health Minister’s statement said: “People who label pregnant women as murderers over abortions refuse to see the far more dangerous threats to lives. Earlier this month, a young woman died at Ondangwa after undergoing a backyard abortion. Her helper was arrested for murder. Many women are hunted down like hard-core criminals, also accused of “baby-dumping”.

The editorial also pointed to the story of a young woman who was arrested and charged with murder after “abandoning” her five-month-old baby while she went to work as a security guard for 13 hours. “A lot is wrong with Namibians, the editor said, if we crush a mother who has just lost her five-month-old infant. Whether abortion, baby-dumping, or abandonment, empathy is what is needed. No woman goes through pregnancy and birth only to get rid of it without incredible emotional and physical pain.”

Minister Haufiku warned that the criminalisation of abortion only makes the crisis worse since the poor suffer most, while the rich can pay professionals to avoid complications, or go to South Africa where abortion is legal. The editorial said: “We support Haufiku that arrests in abortion cases (including baby-dumping and “neglect”) must stop immediately, as those responsible are not a danger to society. In fact, Haufiku and his cabinet colleagues must immediately start the process to legalise abortion and offer counselling. Abortion is not the killer, lack of empathy and care is.”