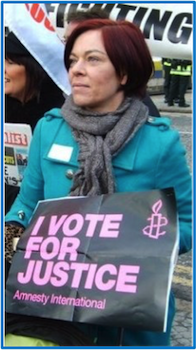 Deputy leader of the Green Party in Northern Ireland Clare Bailey has suggested that men should be prosecuted under Northern Ireland’s abortion ban if their female partner has an abortion. This suggestion arises following the recent prosecutions in Northern Ireland of women who have had abortions using medical abortion pills. She said that if elected to the NI parliament on 5 May, she will propose legislation for men to also be prosecuted for a new criminal offence of “reckless conception”.

This would mean that every time a woman faces prosecution or is prosecuted, the man can be charged and face the same penalty. The law would embed the notion that men are: (1) also responsible for unwanted pregnancies and (2) will be held as liable for their reproductive choices or lack of them as women are and that the law would be in the interests of equality.

Although she was accused of trivialising the issue, a spokesperson for the Green Party pointed to the inaction on the part of five Executive political parties on this issue and said the proposal was an attempt to highlight the use of the Offences against the Person Act 1861 against women, an archaic law that should be dropped.

SOURCES: Belfast Newsletter and The Independent