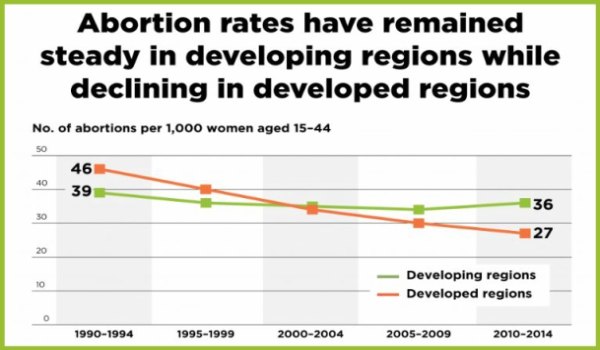 This report highlights ongoing disparities in abortion rates and differential access to safe abortion services in different regions. It pulls together the latest research on abortion incidence, safety and legality, as well as on unintended pregnancy.

Improved contraceptive use, and in turn, declines in unintended pregnancy rates are thought to be the likely driver behind the worldwide decline in abortion rates.

Since 2000, 28 countries changed their abortion law—all but one expanding legal grounds to allow abortions to protect a woman’s health, for socioeconomic reasons or without restriction as to reason. Moreover, 24 added at least one of three additional grounds: in cases of rape or incest, or when the fetus is diagnosed with a grave anomaly.

The safety of abortions has improved because of advances in clinical guidelines and broadening legality in a number of countries. In addition, where abortion laws are highly restrictive, the increased clandestine (self-)use of misoprostol has also improved safety.

Press release (in English), also in Spanish and French