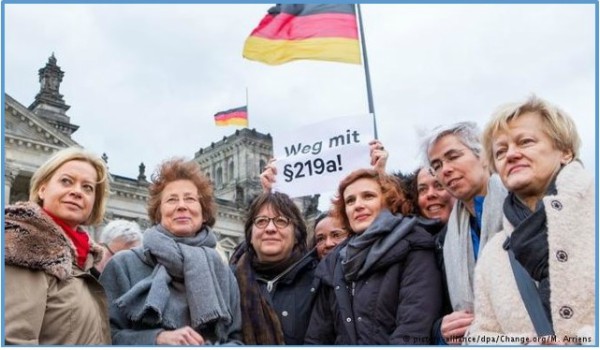 Abortion is restricted by the Criminal Code in Germany, covered in Sections 218 and 219, which follow the sections on murder, in the version promulgated in November 1998 (translated into English). The current law is the result of an extremely difficult negotiation between the former East and West Germany upon reunification. You can find the history here (click on Germany). The text of the current law in English can be found here. It is very condemnatory in tone and intention. On one hand, it does not allow a woman to be held criminally liable for having an abortion if she receives it from a medical person in a hospital or approved clinic, is no more than 12 weeks pregnant, and has had the required counselling and a three-day waiting period. However, many acts by providers are criminally liable, and the description of the role and content of the required counselling is biased heavily against abortion. The text of Section 219(1) says:

“The counselling serves to protect unborn life. It should be guided by efforts to encourage the woman to continue the pregnancy and to open her to the prospects of a life with the child; it should help her to make a responsible and conscientious decision. The woman must thereby be aware that the unborn child has its own right to life with respect to her at every stage of the pregnancy and that a termination of pregnancy can therefore only be considered under the law in exceptional situations, when carrying the child to term would give rise to a burden for the woman which is so serious and extraordinary that it exceeds the reasonable limits of sacrifice. The counselling should, through advice and assistance, contribute to overcoming the conflict situation which exists in connection with the pregnancy and remedying an emergency situation.”

Recently, Dr Kristina Hanel, an abortion provider, was fined €6,000 in 2017 for stating on her website in a very few words that her clinic offers abortion care. In protest, she collected more than 150,000 signatures on a petition calling for Section 219a to be removed from the law, which was delivered to members of the parliament.

Section 219a of the law says it is a crime for anyone to publicly “offer, announce [or] advertise” abortion services. The fine was considered excessive by her supporters, but she could have been imprisoned for up to two years instead. The Greens and the Left party each tabled a bill that proposed to repeal paragraph 219a. The free-market Free Democrats (FDP) recommended amending the clause so that it only penalised abortion advertising “which is done in a roughly offensive manner” (sic).

The doctor, her supporters and Left party, Greens and Social Democrats (SPD) argued that the clause limits women’s access to health care information and is no longer “up-to-date.” However, those with Angela Merkel’s Christian Democrats (CDU), the Christian Social Union (CSU), and the far-right Alternative for Germany (AfD) said they strictly opposed changing the clause, indicating any such change is very unlikely in the current climate.