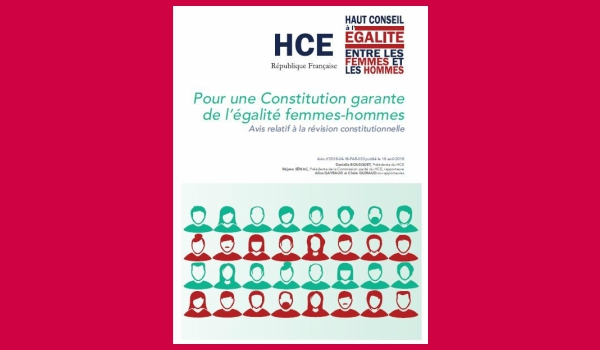 The French Haut Conseil à l’Egalité entre les Femmes et les Hommes (High Council on Equality between Women and Men) is an independent, national consultative body charged with the protection of the rights of women and the promotion of equality between the sexes. It was created in 2013 and is composed of 72 members representing the diversity of individuals who support gender equality. Their remit is to share their expertise with the public authorities, involve French society in their consultative work, assess public policies, formulate recommendations, and encourage public debate.

The Council has published a call for the revision and modernisation of the Constitution of the French Republic to guarantee equality between women and men. Among its recommendations are the constitutional right to access contraception and abortion.

In the document, they argue that although the current Constitution does not create obstacles to gender equality, it does not provide a guarantee for it either, and it carries a centuries-long history of exclusion of women from realising their rights as citizens. In order to fully recognise that those days are over and to protect new, fundamental rights, they call for a revised text that will make equality between women and men visible and explicit at the heart of the Constitution by supporting the equality of all citizens before the law “without distinction of sex”, as is the case for origin and religion, and by replacing “droits des hommes” (which literally means “rights of men” though it is translated as human rights) with “droits humains” (human rights).

They call for the guarantee (rather than just the promotion) of equal sharing of power by ensuring the equal representation of women and men in any governmental appointments. They also call for three new fundamental rights to be recognised in the Constitution:

They have edited a copy of the existing Constitution, entitled Projet de Constitution Revisée, in which they have altered male-focused terminology and added in bold on every page and almost every paragraph, language that guarantees and makes explicit gender equality.