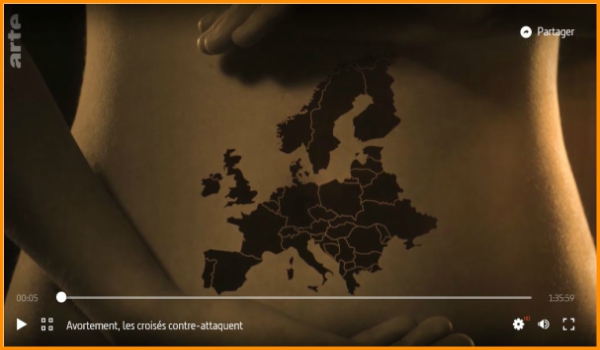 Franco-German television channel ARTE has released a feature-length documentary today as a contribution to International Women’s Day, focusing on the anti-abortion movement in Europe. It is entitled, in French, “IVG : Les croisés contre-attaquent” (Abortion: The crusaders counter-attack). It is 95 minutes and has a number of revelations about the anti-choice movement in Europe. For example, it follows a number of women in Italy and Hungary who would like to have an abortion, but who faced many challenges in exercising this right. It also shows how the anti-choice movements in France have renovated themselves to appear “cool” in the hopes of attracting young people, and how they are seeking to sully the reputation of Simone Veil (the author of the French abortion law who died late last year). The documentary also shows anti-choice movements seeking to influence European institutions with the support of Russian oligarchs, the US Christian right and the Trump administration.

It is said to be a very powerful film.

The French version can be found on the ARTE website at: https://www.arte.tv/fr/videos/075221-000-A/avortement-les-croises-contre-attaquent/.

The German version can be found at: https://www.arte.tv/de/videos/075221-000-A/pro-life-abtreibungsgegner-auf-dem-vormarsch/.