Home » News » FRANCE: CYTOTEC WITHDRAWAL ! – Consequences for African countries close to France of the imminent withdrawal of Cytotec (misoprostol) from the market in France 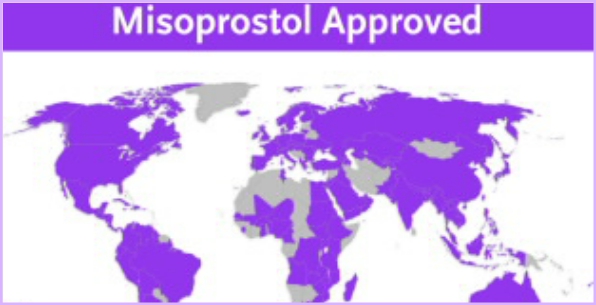 It seems Pfizer’s decision to withdraw Cytotec (their brand of misoprostol) in France has been ill-thought out. The reason given was that in October 2017 they received reports that its off-label use for induction of labour had caused complications in a few women. We reported at that time that they had the agreement of the French drug regulatory agency ANSM to stop marketing Cytotec in France altogether, even though no problems have ever been reported about its use with mifepristone for medical abortion. Off-label use is a normal practice in medicine; hence, the real reasons behind this decision remain unstated. But as one French abortion provider told us: a pharmaceutical company doesn’t need to make its reasons public.

The Lancet had to retract what they had published about it in October because the facts were so unclear, and then they reported in November 2017 that a new product would come onto the market to replace Cytotec for induction of labour. But what about a replacement for misoprostol for induced abortion?There are in fact two other misoprostol products sold in France. One is produced by Linepharma, and their product (Gymiso) is approved for medical abortion. However,Gymiso costs far more than Cytotec. They charge €15 for a packet of only two pills, while Cytotec costs €20 for 60 pills. Given the cost difference, can this be considered a comparable replacement? There is a second alternative called MisoOne produced by Nordic Pharma which is apparently also going to be available, but the price is not yet known, the tablets are 400µg instead of 200µg (affecting the regimen), and whether it will be available outside hospitals is also not yet known. Hardly an ideal situation when withdrawal of Cytotec is only a week away.

Dr Selma Hajri, a Tunisian abortion provider and trainer, who is one of those responsible for introducing medical abortion in Tunisia, believes that the consequences for France of Cytotec withdrawal, though inconvenient, will probably be minor,in that providers will most likely be able to continue to find and prescribe Cytotec or use the alternative brands. In the public sector in France, the cost of misoprostol is reimbursed by the social insurance, so although the cost to the state will be higher if Gymiso is used, it will not affect women’s pockets individually.

However, as Dr Hajri told us: “The consequences for the countries that are sourcing Cytotec from France, including Tunisia and Morocco in particular, are far more important.It may have deleterious effects for abortion in both the first and the second trimester, and particularly in the private sector, where misoprostol is used alone. In Tunisia, abortion is legal and the medical method is used in more than 80% of cases in the public sector. Until now, in the public sector Cytotec is used with Mifégyne (an Exelgyn product).Mifégyne is very expensive,but when used with Cytotec, whose price is so low,it is possible to keep the overall cost reasonable. But with an expensive misoprostol product, the cost would go up a lot.”

For the private sector in Tunisia, as well as in Algeria and Morocco, gynaecologists have had easy access to Cytotec sold in pharmacies in France, and they regularly buy it at their own expense. But from 1st March, everything will change. Yet the consequences appear to have created very little interest or concern in France.

There seem to be no immediate alternatives for countries like Tunisia.Although Medabon (a combination pack of 1 mifepristone and 4 misoprostol pills, produced by Sun Pharmaceuticals) has had marketing authorisation in Tunisia for the past two years, it is still not available there. From 1st March, says Selma Hajri: “There will be a big problem for the supply of misoprostol, particularly in the countries neighbouring France, and probably for several French West African countries too, from which the circulation of people to and from France is very fluid and important. The withdrawal of Cytotec in France means lack of access to a goodquality, low-cost product that is not subject to the hazards of the black market or the risk of counterfeit production. The result will be to further reduce women’s access to safe abortion.”

On 5 December 2017, we reported that France’s National Association of Clinics for Abortion and Contraception and the French National College of Obstetricians & Gynaecologists were mobilising against the Pfizer decision, and abortion providers were calling for an affordable generic equivalent to Cytotec for medical abortion to be put on the market if Cytotec is withdrawn. But there seems to have been no further news since.

Misoprostol is on the WHO Essential Medicines List, along with mifepristone. We consider it unethical and a violation of women’s right to health and health care for Pfizer and the French government to allow this medication to be removed from the market without ensuring that a comparable replacement at the same low cost as Cytotec is made available.We call on:

In the long-distant past, the global health and feminist women’s health movements used to promote public health control over the pharmaceutical industry because they failed to take sufficient account of our need for access to medications,like Cytotec,for our health and lives. Perhaps it’s time to ask whether anything has changed substantially since then, and for whom, and to start that conversation again.