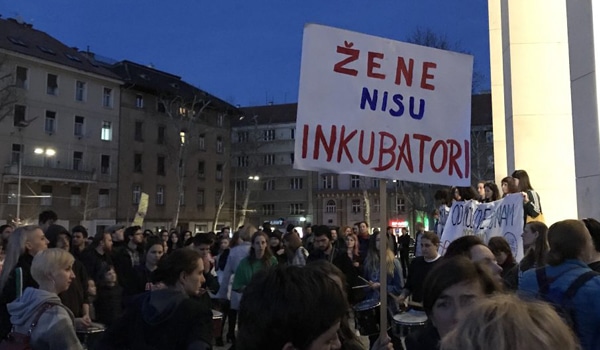 The combination of anti-abortion views, religious fanaticism, populism and right-wing politics is a dangerous cocktail. But that is what has been emerging in recent years as the underpinnings of contemporary anti-abortion movements in different parts of the world, with the added danger that they are connecting internationally. Here are four recent reports:

Women are not incubators,

In February 2020, the agency Ipsos conducted a survey on the attitudes of people in Croatia to abortion. The results were published the Platform for Reproductive Justice on 24 February. The findings, based on a representative sample, were that 81% believe that women in Croatia should have the right to choose when it comes to pregnancy, childbirth and abortion – 68% fully agreed and 13% generally agreed. Only 4% completely disagreed and 3% generally. When asked whether religious communities should influence health policy on abortion, 62% answered no and only 20% answered yes. Similar percentages to the question of whether abortion should be free (63% yes, 18% no).

Yet two years before, the group Walk for Life had collected 170,000 signatures on a petition calling for a ban on abortion and supporting conscientious objection by doctors.

Also in February, 22 MPs in the Croatian parliament tabled a proposal to set up an inquiry into the financing, work and influence of organisations that provide anti-abortion counselling to pregnant women, in order to prevent quackery and disinformation about abortion. They had learned that so-called pregnancy crisis centres were spreading in Europe, including in Croatia, and evidence that some of these pseudo-medical institutions are receiving funds from the USA.

Holding this inquiry was supported by Predrag Fred Matić, the European Parliament’s Rapporteur on sexual and reproductive health and rights in the European Union.”I am appalled that there are people who tell pregnant women that in the event of an abortion, they will lose their minds and their partners will become homosexuals,” Matic said in February.

Matic had been scheduled since February to present a “Report on the Situation of Sexual and Reproductive Health and Rights in the EU” at a plenary session of the European Parliament in mid-June. And indeed, on the agenda of the plenary session for 18 June, was the following agenda item: “Disinformation/Fundamental rights: MEPs will discuss the effects of fighting the spread of Covid-19 on fundamental rights in the EU as well as the impact of disinformation campaigns by foreign actors trying to exploit uncertainty in society and people’s fears.” (More on this forthcoming)

Parliamentary elections are due to take place in Croatia on 5 July. In a video debate on 17 June, organised by the dailyVecernji list, Goran Jandrokovic, from the ruling conservative Croatian Democratic Union (HDZ) and the nationalistic singer Miroslav Skoro, leader of a new right-wing Homeland Movement, both expressed hostile views to abortion. Skoro even stated that this also applied to rape victims. “If a woman becomes pregnant after being raped, then she must agree with the family what she will do,” he said.

These statements have been met with strong condemnation: “It is absolutely unacceptable that such a discourse appears in the public space at all. It is shameful to collect political points in the name of what is a tragedy for many women,” Marinella Matejcic, from the Platform for Reproductive Justice, said. She called these statements part of a “barbaric discourse and an unquestionable, and not at all subtle, message that a woman has no rights and no autonomy”. A woman’s autonomy, she said, is first violated by the act of rape, and then even further “by the idea that third parties should have the right to decide the victim’s life”.

This was not the first such encounter in the campaign. On 8 June, N1 television filmed a debate between Nino Raspudic, an independent candidate for the conservative MOST party, and Sabina Glasovac, from the centre-left Social Democrats. Raspudic claimed that “abortion is murder” and that “life needs to be defended”. He claimed the reasons for abortion are often purely economic and that the percentage of raped women who decide on abortions is small. He recalled testimonies of children who were conceived as a result of rape in the 1992-5 war in Bosnia who he said “managed to realize themselves as happy people”.

Croatian Education Minister Blazenka Divjak posted on her official Facebook account the next day that she felt appalled by such statements. “How come they, as men, even think to impose on women how they should feel … or whose opinion they should seek in any situation related to their lives. I guess the next thing on the agenda is that women can only vote in consultation with (male?!) family members!” she wrote.

Despite the Ipsos poll, access to abortion is shrinking in Croatia, limited by the dwindling number of doctors prepared to carry out the procedure, by the cost, and by social stigma. Marinella Matejcic, from the Platform for Reproductive Justice, said: “Abortion is a medical service that must be available at the request of a woman and it is unbelievable that politicians take for granted their right to poison the public space with such toxic, backward and violent ideas.”

“I’m going to anoint you with alcohol gel and pure tuberose, and you’ll be ready to beat the virus.”/

“They want to generate panic by vaccinating everyone and implanting us with a chip.”/

“If you hug someone, nothing will happen.”/

“Abortion can cause drug addiction.”/

“Covid-19 can be cured by eating cinnamon three times a day.”/

“The risk is the new world order.”

“It’s very likely that with this vaccine (the one being developed against Covid-19) they will place a geolocation nanochip inside our bodies,” said Argentine presidential candidate, Alberto Savazzini, an admirer of Jair Bolsonaro and leader of the God is Love (I.D.E.A.) organization, a small evangelical church in Buenos Aires. Savazzini’s statement draws forth one of the points that the most fundamentalist religious groups in Latin America are driving during the pandemic, appealing to fear and guilt: they say that the coronavirus was invented in a laboratory, that the vaccine in progress will be an instrument to control humankind and that this crisis is the result of a long series of sins.

One of the primary features of this health crisis is uncertainty. With no specific cure, with experimental clinical treatments, ongoing knowledge about the virus, with intensive care units collapsing, thousands of deaths and a galloping economic crisis for thousands, unemployed due to isolation measures, dozens of fundamentalist organizations have used this context to promote measures and actions that have even put people’s health at risk. Their leaders have questioned health measures and called acquired rights, such as legal abortion, equal marriage, and gender-sensitive education, a sin. In this context, they have found dangerous allies for health: anti-vaccine movements.

“Unsaintly Powers” is a journalistic investigation led byOjoPúblicoin Peru, Argentina, Brazil and Mexico, together with Agencia Pública and PopLab, which discusses and details specifically the role that these ultraconservative political and religious organizations are playing during the health crisis. As part of this research, the team of reporters built a preliminary database of 298 actions promoted, between March and May, by 120 political actors and religious leaders from different churches, cults, parties and organizations…

The economic and social crisis of the coming months could become fertile ground for ultraconservative ideas and proposals. Religious freedom is a guaranteed right, but as detailed by the reports in this series, coordinated by OjoPúblico, in Latin America the political lobbying of these fundamentalist organizations is affecting civil rights that promote equality and universal access to health.

“They’re doctors. They’re also incredibly effective and dangerous anti-abortion activists. Your OB-GYN could be one of them, by Marisa Endicott, Mother Jones, 4 June 2020

In the USA, a breakaway group from the 60,000-strong American College of Obstetricians and Gynecologists, called the American Association of Pro-life Obstetricians and Gynecologists, with 5,700 members, was launched in 2013. NARAL (National Abortion Rights Action League) describes them as an “anti-choice movement [that] has recognized that research plays a critical role in framing the national conversation about abortion and has thus invested heavily in giving pseudoscience and other intentionally misleading content the veneer of respectability.” They lobby the Food & Drug Administration to remove its approval for mifepristone, for example, and claim emergency contraception is abortifacient. They spend tens of thousands of volunteer hours every year to provide policy makers and state and federal judges with false versions of medical informationthat claim abortion is dangerous, causes mental health problems, and can even be reversed once begun, relying on either poorly done studies or outdated data or both.

Excerpts from a letter from Moldova for Life, 7 May 2020

“Incomplete statistics over past years demonstrate that in the Republic of Moldova more than 13,000 children were aborted annually. However, there are many more for which statistics are not kept: children whose lives were ended via medical abortion and abortions conducted for young persons and adults working abroad, which make up a sizeable portion of the overall reproductive-age population in the Republic of Moldova. If these abortions were taken into consideration, which are not included in the statistics, the total number of abortions would probably be much larger than that reflected in the statistics. Not only did these unborn children lose something – life! – but we, everyone, all the survivors, have lost their presence next to us, the gifts and potential of every single one of them. We have pretended that we do not know the simple truth: that they are alive and unique from the moment of conception. We have lost touch with the love that we so naturally directed toward them and their mothers.

Given that traditional civilizations and spirituality have never supported abortion, the huge number of abortions is caused by ignoring the issue of crisis pregnancies and the existence of a pro-abortion public mentality.

A crisis pregnancy occurs at the moment a woman considers terminating the natural course of her pregnancy, that is, the birth of the child, and thinks about the possibility of having an abortion. Crisis pregnancies are the result of external problems which the woman is not able to deal with. This reality is barely studied in Moldova. Here are a few scientific results from the United States:

We present you with a few international practices that you can implement to consolidate national public policies related to crisis pregnancies to support women in such situations: