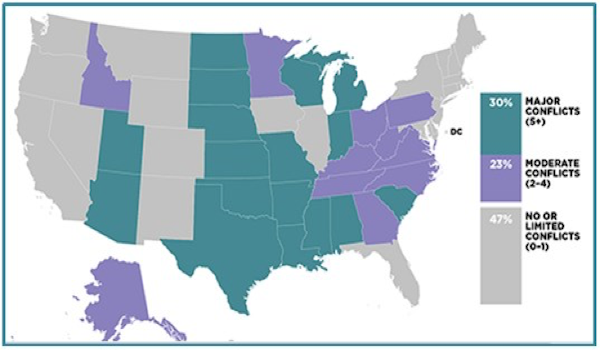 The anti-abortion movement has long been an evidence-free zone and many of its signature initiatives and proposals are devoid of any factual foundation. This analysis walks readers through the 10 major types of abortion restrictions imposed by US states and details the ways in which they conflict with sound evidence. Restrictions are grouped into three broad topic areas:

Some states have mandated specific standards for abortion providers that do little or nothing to improve safety, but significantly limit access to abortion. These include imposing excessive physical plant requirements, requiring providers to have unnecessary admitting privileges at local hospitals, banning the use of telemedicine for medical abortion, and limiting provision to physicians.

Some states require that providers give women information on the consequences of abortion that is contradicted by the scientific evidence, including misinformation about mental health, future fertility and breast cancer. Some states also impose mandatory waiting periods based on the faulty premise that women need additional time to consider their decision.

Several states have used disproven assertions that a fetus can feel pain before science indicates it is possible as a basis for either banning abortion beyond 20-22 weeks or informing women that an abortion could cause pain to the fetus.

30% of US women of reproductive age live in one of the 17 states with at least five of the 10 types of restrictions; another 23% live in states with 2–4 restrictions. Thus, 53% live in a state with moderate or major conflicts with scientific evidence.