Home » News » FACEBOOK AGAIN !! – Facebook took down a fact-check of two anti-abortion videos that deny abortion is ever medically necessary 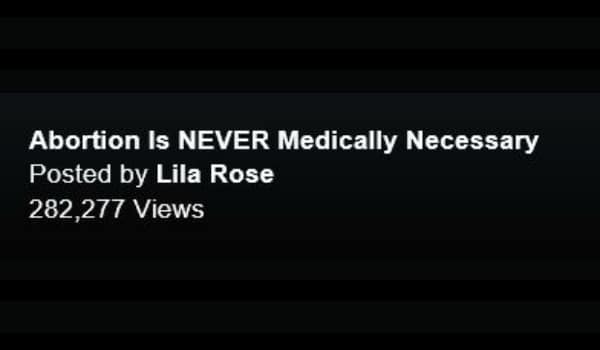 Ectopic pregnancy can kill if left untreated. In most cases, the only way to treat it is to end the pregnancy with medication or surgery. But some abortion opponents are arguing that patients with ectopic pregnancies can simply be monitored until they miscarry – or even that such pregnancies can be carried to term. This is dangerous rubbish. Yet it seems that anti-abortion fantasising is a contagious disease in the USA, infecting even Republican Senators.

Indeed, two anti-abortion videos claim that abortion is never medically necessary to save women’s lives. But as obstetricians Dan Grossman and Robyn Schicklet write: “Things can go tragically wrong during pregnancy. Sometimes when tragedy strikes, the best medical treatment involves abortion, because that’s the fastest and safest way to save the pregnant woman’s life.”

A fact-check of the films was conducted by an independent fact-checking group. They were rated as inaccurate. The fact-check was published online on 30 August. A link appeared next to the videos on Facebook, notifying viewers of the inaccurate information. More than 2,000 people who follow the Live Action page received a notification that the content had been rated as false, according to the group, which also said it was notified that its page had been categorised as “false news”. “Your Page has reduced distribution and other restrictions because of repeated sharing of false news. People will also be able to see if a Page has a history of sharing false news,” Facebook wrote, according to a screenshot it published on its website. The fact-check pointed out several medical conditions including pre-eclampsia, HELLP syndrome, and placenta praevia that can make abortion necessary to save a woman’s life.

In the USA, however, even basic facts like these are so highly politicised that Facebook seems to have become “unwilling to stand up to those pushing misinformation on the subject” – in this case, four US Senators, all Republicans, Ted Cruz, Josh Hawley, Kevin Cramer and Mike Braun – who along with something called LiveAction accused them of censorship and bias against conservatives. They argued that the fact-check could not be fair because two of the people who wrote it had ties with pro-choice organisations, who they dismissed as “abortionists and liars”. In response, Facebook rolled over and removed the fact-check.

In response to these fantasists, Dr Jen Gunter, an obstetrician-gynaecologist wrote on Twitter on 9 September: “If you have never treated a woman with a belly full of blood from an ectopic you should shut the f… up and sit down and learn before you get someone killed.”