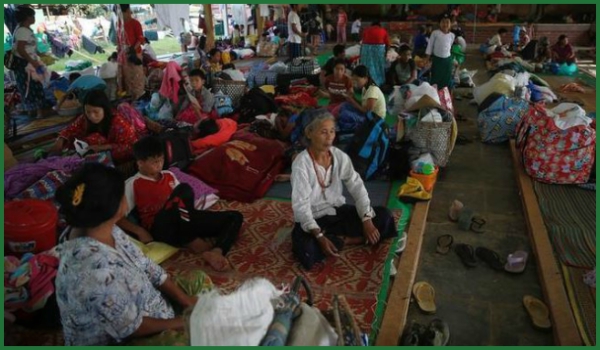 In November 2017, the Global Justice Center in New York drafted a letter to two high-level representatives of the European Commission regarding the provision of non-discriminatory medical care in conflict settings in line with, including safe abortion, and circulated it internationally for signatures. It points to commitments made in 2015 regarding women and girls raped in armed conflict that have not yet been acted upon. The letter was signed by 91 CSOs from around the world, including the Campaign, and sent on 23 November to:

>H.E. Federica Mogherini, High Representative of the Union for Foreign Affairs and Security Policy and Vice-President of the Commission, and

The full text and list of signatories can be found here: joint CSO letter.

The letter asks the European Commission to make it clear that international law – not politics – determines the right to medical care of women and girls affected by armed conflict, and calls on them to take the following steps:

including the provision of safe abortion under the conditions set out in your policy.

They received a response on 8 January 2018, which said:

“As we have both stated before, the fate of women and girl survivors of rape, including those who do not have access to safe abortions or are forced to carry to term unwanted pregnancies, is an issue of concern. On 11 September 2015, we, as you acknowledged, addressed this issue in a letter replying to a group of Members of the European Parliament. The content of that letter did not reflect a new position: humanitarian partners are free, and have always been free, to choose the most appropriate treatment for their patients in light of the given contextual factors, which may also include the legal framework of the country, and the security of both victims and humanitarian workers. We remain also open to dialogue with our partners in order to monitor the relevant humanitarian needs and ensure the appropriate response.

“We are also following closely the impact of the Global Gag Rule. At the same time, segregation of funding is unlikely to help fully resolve the issue as we understand that the US policy applies to any organisation engaging into the activities concerned irrespective of the source of funding used to that effect. However, we will continue following this issue, including in terms of its effects on the humanitarian needs and the work of our partners.”

The initial reaction of the Global Justice Center is: “In our opinion the response does not address the key recommendations raised in the CSO letter. While we agree with the Commission that humanitarian partners should be free, it does not excuse the European Commission nor its partners from implementing international humanitarian law throughout their operations.” We agree.

The issue of segregating funds from US aid money in humanitarian settings in order to provide safe abortion whenever needed, needs further consideration. While everyone agrees it is both crucial and desirable, it is not clear it is possible because of US restrictions.

The Global Justice Center will seek continued dialogue on achieving these aims and keep us informed.