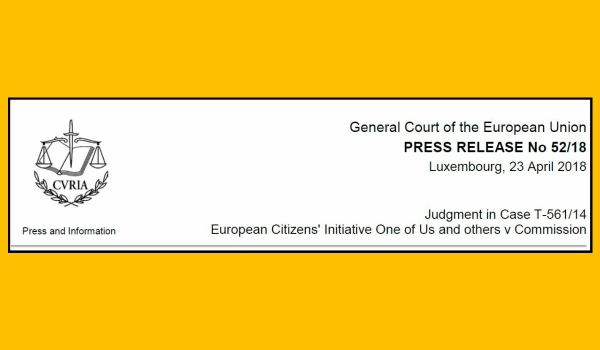 According to the Treaty on European Union, EU citizens, not fewer than one million from at least a quarter of all Member States, may take the initiative of inviting the Commission, within the framework of its powers, to propose to the EU legislature to adopt a legal act for the purpose of implementing the Treaties (‘European citizens’ initiative’). Before being able to begin collecting the requisite number of signatures, the organisers of the initiative must have it registered with the Commission, which examines in particular its subject matter and objectives.

In 2012 the Commission registered the proposed European citizens’ initiative entitled ‘One of Us’. The objective of that initiative was to establish a ban and end the financing, by the EU, of activities which presuppose the destruction of human embryos (in particular in the areas of research, development aid and public health), including the direct or indirect funding of abortion. After its registration, the initiative collected the requisite million signatures and was officially submitted to the Commission in early 2014. On 28 May 2014 the Commission stated in response that it did not intend to take any action.

Dissatisfied with this communication, the authors of the initiative sought its annulment before the General Court. In its 23 April 2018 judgment, the Court noted that the Commission has a near-monopoly on legislative initiative. According to the Court, however, a European citizens’ initiative cannot require the Commission to submit a proposal for a legal act. Otherwise, the Commission would be stripped of all discretion in exercising its legislative powers in the face of any such initiative.

The Court also noted that, as all EU expenditure has to be in compliance with the EU Treaties and the Charter of Fundamental Rights, EU law ensures that all EU expenditure, including in the areas of research, development cooperation and public health, must respect human dignity, the right to life, and the right to the integrity of the person. The Commission explained that current EU legislation already meets numerous requests of the authors of the initiative, including controls regarding the destruction of human embryos. Lastly, the Commission argued that the support provided by the EU for the health sector in developing partner countries contributes substantively to a reduction in the number of abortions via access to safe and quality contraceptive services and that a ban on abortion funding in developing countries would constrain the EU’s ability to attain the objectives set out in the Millennium Development Goals, particularly that of maternal health.

Finally, the Court noted that the Commission did not commit a manifest error of assessment. Thus, it did take into account the right to life and human dignity of human embryos – while also taking into account the needs of human embryonic stem cell research, which may result in treatments for currently incurable or life-threatening diseases, such as Parkinson’s, diabetes, stroke, heart disease and blindness. Equally, the Commission demonstrated a link between unsafe abortions and maternal mortality, so that it was able to conclude, without committing a manifest error of assessment, that the ban on abortion funding would constrain the EU’s ability to attain the objective of reducing maternal mortality.

Full text of the judgment