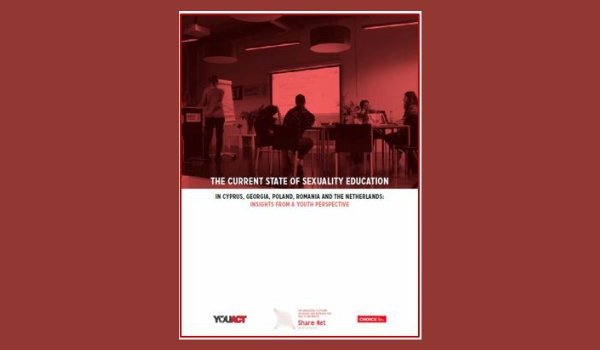 Aiming to bring attention to the need for comprehensive sexuality education (CSE) and to empower and encourage young leaders to influence their national policies, CHOICE for Youth and Sexuality and YouAct initiated the “Europe for CSE” project, with support from ShareNet. Youth advocates from Cyprus, Georgia, Poland, Romania and the Netherlands joined forces, worked online and met in Amsterdam to set-up concrete advocacy plans at national level, including meetings with volunteers, round tables, online campaigns and reaching out to policy makers and influencers.

Eastern Europe is a region that still faces huge economic and social disparities and persisting inequalities, which hinder human rights’ advancement. Recently, the region has encountered the rise of well-organized and funded opposition aiming to block access of youth and women to basic reproductive and sexual health services and information. Not only are young women in Eastern Europe three times more likely to have an abortion or unintended pregnancy than young women in Western Europe, the region also struggles with a growing epidemic of HIV/AIDS. In addition, gender-based violence is widespread, homophobic and transphobic attitudes persist, and a significant part of Europe’s youth population still does not have access to comprehensive sexuality education. But also in Western European countries such as the Netherlands not all young people have access to proper comprehensive sexuality education.

Comprehensive sexuality education programmes help young people develop self-esteem and life skills that encourage critical thinking, clear communication, responsible decision-making and respectful behaviour. Only when young people are fully informed about their options can they protect themselves against illnesses and make decisions about their own body.

The project involved desk research as a base for their own advocacy action plans, but also as a collection of information and knowledge on CSE and other SRHR themes by young people for young people. Another core element of the project was the development and dissemination of infographics related to CSE and the selected sub-themes in each country. Both are summarised in this publication.