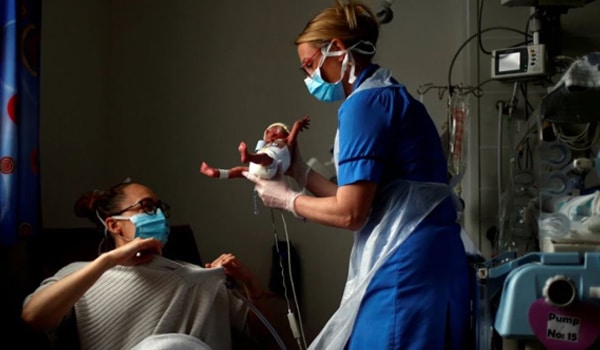 As countries around the world told people to stay home to slow the spread of Covid-19, doctors in neonatal intensive care units were noticing something strange. It started with doctors in Ireland and Denmark. Each team, unaware of the other’s work, crunched the numbers and found that during the lockdowns, premature births – especially the earliest, most dangerous cases – had plummeted. When they shared their findings, they heard similar anecdotal reports from other countries.

They don’t know what has caused this. Moreover, they do not understand the causes of premature birth nor know how to prevent it, which has been elusive until now. These studies have not yet been peer reviewed. Nevertheless, they do represent significant reductions from the norm, and some experts think further research is warranted.

In the USA, about one in 10 babies is born early. According to the Centers for Disease Control and Prevention (US CDC), babies born premature, especially before 32 weeks, are at higher risk of vision and hearing problems, cerebral palsy and death. How to prevent early births, however, is as yet unknown.

Dr Roy Philip, a neonatologist at University Maternity Hospital in Limerick, Ireland, had been abroad when Ireland entered lockdown on 12 March. He noticed when he returned to work in late March that there had been no orders while he was gone for the breast milk-based fortifier that doctors feed to the tiniest babies. The staff said there had been no need, because no premature babies had been born all month. Dr Philip and colleagues decided to compare the hospital’s births between January and the end of April in every year between 2001 and 2019. They found 30,000 in all. These represented about 8 in every 1,000 live births classified as very low birth weight (under 3.3 lb). In 2020, up to the end of April, the rate was about a quarter of that, and there had been no infants under 2.2 pounds at all. By the end of June, with the national lockdown easing, there had still been very few early preemies born in his hospital. In two decades, he said, he had never seen anything like these numbers.

In Denmark, researchers were finding the same thing. Dr Michael Christiansen of the Statens Serum Institut in Copenhagen and his colleagues used newborn screening data to compare births nationwide during the strictest lockdown period, March 12 to April 14, with births during the same period in the previous five years. The data set included more than 31,000 infants. They found that during the lockdown, the rate of babies born before 28 weeks had dropped by 90%.

Additional reports were shared by:

Dr Patrick shared his observations on Twitter, and heard similar stories from others in the country. Others responded that their units were as busy as ever, however. And some groups in other countries said they had not seen a change, either. He thought that highlighted how important social determinants of health are for patients.

Speculation about what could have caused the change included: Getting more rest. By staying home, experiencing less stress from work and commuting. Getting more sleep. Receiving more support from families. Avoiding infections in general by staying at home. Some viruses, such as influenza, can raise the odds of premature birth, for example. Less air pollution, which has been linked to some early births as cars stayed off the roads.

Dr Jamieson, from the US CDC, thought these observations were surprising. She said she would have expected to see more preterm births due to the stress caused by the pandemic, not less. But not all pregnant women will have experienced the lockdowns in the same way, as different countries have different social safety nets in general, and the stress of unemployment and financial insecurity may have affected communities unevenly. According to the CDC, premature births in the US rose in 2018 for the fourth straight year. White women had about a 9% risk of premature birth in 2018, while for African-American women the risk was 14%.

Hannah Dahlen, Professor of Midwifery at Western Sydney University in Australia also heard anecdotal reports from midwives and obstetricians across Australia about the same phenomenon. She was quoted to say: “When things are stressful [pregnant] women do one of two things, they either birth the baby quickly or they keep the baby in. It probably dates backs to the ancient roots. If you were out in the desert and you were going to be potentially attacked by wild animals, you want have the baby quickly and run, or you want to keep the baby in and run. So, are women keeping their babies in psychologically until it’s a safe time to let them out?”

Only about 1% of Australian babies are born before 27 weeks, a rate that has been stable in Australia for many years. However, data from the Royal Women’s Hospital during March and April this year showed a slight decline in very early premature babies being admitted. Twenty-two early pre-term babies were admitted to the Royal Women’s neonatal intensive care unit in March last year, compared with 17 for the same month this year. In April last year, 24 very early pre-term babies were admitted to the unit, compared to 20 this year. While the difference is somewhat striking, Dr Clare Whitehead, Royal Women’s Hospital, Melbourne, Australia, who is part of the World Health Organization’s working group for Covid-19 in pregnancy, suspects it may be tied to greater implementation of preventative measures, such as as cervix screening, rather than the lockdown.

Anecdotal observations about a reduction in premature births have also been noted by doctors in Canada, the Netherlands, and New Zealand. In contrast, premature births increased in China during the pandemic lockdowns. Thus, the search for answers is just beginning.

The Danish and Irish researchers have now teamed up and are building an international group of collaborators to study how Covid-19 lockdowns have affected early births. Any research must also examine whether women themselves have been experiencing more or fewer adverse outcomes with pregnancy during the pandemic.

[These are both pre-prints, they were not peer reviewed before publication, so should not be used to guide clinical practice.]